Fossil hunters in Burma have discovered the earliest specimen of grass yet found – and say it’s laced with a hallucinogen. 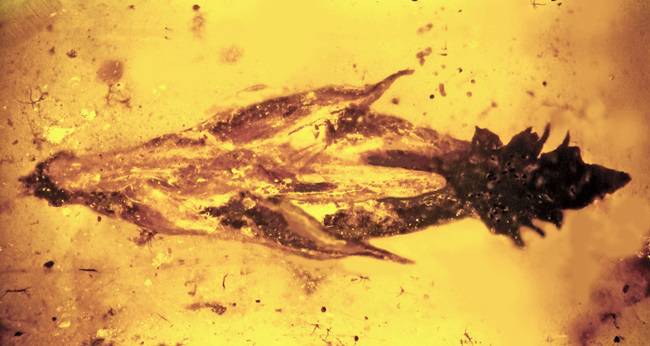 Ancient amber encasing early grass – no, not that kind

The plant remains date from between 97 and 110 million years ago, and are encased in a chunk of amber. Around the head of the grass, scientists found a now-extinct fungus, Palaeoclaviceps parasiticus, which is related to ergot, the naturally occurring substance that is used to synthesise LSD.

"This parasitic fungus may have been around almost as long as the grasses themselves, as both a toxin and natural hallucinogen," said George Poinar, Jr, faculty member in Oregon State University College of Science.

"There's no doubt in my mind that it would have been eaten by sauropod dinosaurs, although we can’t know what exact effect it had on them."

Sauropods – like the gigantic Paralititan that lived about 100 million years ago – are the largest known land animals. Their huge size may have helped reduce the effects of the fungus – but the amount of hallucinogens needed to make life interesting are so tiny that even their bulk may not have saved them.

Ergot poisoning used to be a fairly common occurrence until humans worked out it was bad for them: the substance has been linked to odd behavior within medieval cults and during the Salem Witch trials, and the installation of Windows on seven-inch tablets.

“Few fungi have had a greater historical impact on society than ergot,” Poinar and his team wrote in their report on the finding in the journal Palaeodiversity.

After ingesting ergot, the victim can suffer from severe muscle spasms and hallucinations. Other side effects include gangrene leading to the loss of fingers and toes, or in serious cases whole arms and legs.

Modern chemistry however has proved ergot’s worth as a very useful substance, with over a thousand compounds extracted from it, or synthesised using it. Most famous of these is lysergic acid diethylamide, or LSD, which was synthesised (and accidentally ingested) in 1938 by Swiss chemist Albert Hofmann.

"It seems like ergot has been involved with animals and humans almost forever, and now we know that this fungus literally dates back to the earliest evolution of grasses," Poinar.

"This is an important discovery that helps us understand the timeline of grass development, which now forms the basis of the human food supply in such crops as corn, rice or wheat." ®