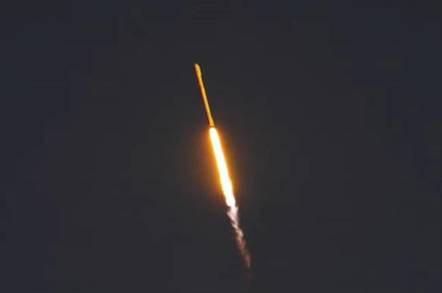 Sadly, extreme sea weather has prevented SpaceX from attempting to land the lower stage of the reusable Falcon 9 back on Earth.

The rocket blasted off from Cape Canaveral after four days of delays, mainly caused by cloud and wind but also by a failure in the tracking radar used by the ground station. Liftoff was on schedule at 1505 Pacific Time (2305 UTC) and all systems are looking good so far.

The rocket is delivering the Deep Space Climate Observatory (DSCOVR) or – as it’s known at NASA – GoreSat. The brainchild of the former vice-president, the satellite is designed to monitor solar wind patterns and provide an early warning system against solar flares.

The launch was live-streamed over the web – the action starts after the 7-minute mark in the video below:

The bird was shelved for eight years between 2000 and 2008, but has been brushed off for use.

Assuming all things go as planned, the Falcon 9 rocket will boost the satellite well clear of low-Earth orbit and into space proper – a first for the delivery system. The satellite will then make its way to the L1 Lagrange point and use the gravitational attraction of the Sun and Earth to hold it in position 1,500,000 kilometres (930,000 mi) away.

SpaceX had been planning to land the lower half of its Falcon booster on its floating space-pad Just read the Instructions so it can be reused, but a severe storm has moved into the area, off the Florida coast. There are reports of fifty foot waves breaking over the semisubmersible platform, and one of its four engines has been disabled.

Planning a significant upgrade of the droneship for future missions to handle literally anything. Maybe give it a Merlin for good measure :)

Under the circumstances attempting a landing is out of the question and instead the team will bring the rocket down and hover it above the ocean to collect data on how to do it in calmer weather. Musk said that the payload can't be delayed any longer, and so the rocket will land at sea – with a less than one per cent chance of survival, he said.

That might sound like a bit of a cop out, but the deep space nature of the mission means the falling Falcon will be traveling twice as fast as normal, and the team want to find if they can still keep the rocket falling upright and under control.

Further updates on DSCOVR's progress will be added as they come in. ®

SpaceX has confirmed the lower stage of its Falcon 9 has gone into the drink. A secondary burn to push the satellite into outer space is planned in 20 minutes, and only then can Elon Musk's rocketeers can claim success.

The final rocket burn has gone as planned and the fairing around DSCOVR has been popped off as planned. The satellite has now separated from the rocket and activated as planned 32 minutes and 36 seconds after launch.

Just months from now, #DSCOVR will turn its gaze toward Earth and send back critical data on our planet’s health http://t.co/p4D7ngrqsD

As for the hovering first stage, Musk reports that it was successfully piloted down to sea level and within 10 meters of its intended target. In good weather he said the team now believes it has a "high probability" of landing successfully. ®