It was a simple error, honest, says TV maker 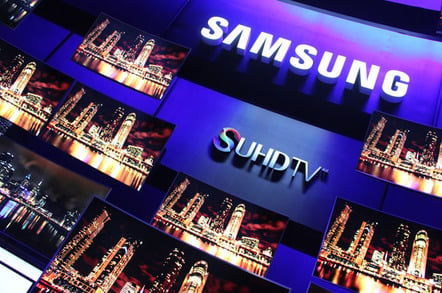 Samsung Electronics says it is not deliberately inserting ads into peoples' privately owned films following complaints from Australians. Sammy said the adverts appeared due to an "error", and has announced an investigation.

It emerged that embedded ads were appearing in the company's video streaming app, after users took to several forums to complain that a Pepsi commercial had been inserted into privately-stored films.

One Reddit user wrote: "I watch most of my TV shows on a Samsung Smart TV and it has been fantastic for the past year. Recently it has been stopping half way through a show or a movie and has played a Pepsi ad that is muted."

"It does not do this on any other platform (PC, PS4, tablet) [and] has anyone else experienced this?", the user continued.

Another user wrote in the Plex forum: "I have recently upgraded my Plex Media Server to version 0.9.1101 and every 10-15 minutes whilst watching content on my Samsung TV I get a Pepsi advertisement showing!"

"At first I thought I was seeing things but no, it repeats. Sometimes I can get out of it and go back to my media, others it hangs the app and the TV restarts. Very annoying to say the least," the user added.

It follows a recent change to the company's privacy policy language after it was spotted that the company had warned customers their own TVs were spying on them.

A Samsung spokeswoman said: "We are aware of a situation that has caused some Smart TV users in Australia to experience program interruption in the form of an advertisement. This seems to be caused by an error, and we are currently conducting a full and thorough investigation into the cause as our top priority."

"This situation has so far been reported only in Australia. We would like to apologise for any inconvenience experienced by our customers," she added. ®