Watch it: It's watching you as you watch it (Your Samsung TV is)

Glass eye - quite so 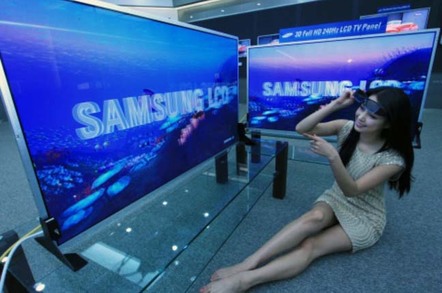 Samsung's smart televisions don't just do what you tell them to – they also use their voice recognition capabilities to tell unspecified third parties what you're saying while you sit in front of them. If that's not a bit worrying, we don't know what is.

Sharp-eyed folks have spotted Samsung's confession to that this effect in the UK privacy policy for its SmartTV range. The section on voice recognition kicks off with the anodyne: “To provide you the Voice Recognition feature, some voice commands may be transmitted (along with information about your device, including device identifiers) to a third-party service that converts speech to text or to the extent necessary to provide the Voice Recognition features to you.”

So far, so mostly-reasonable: if a telly had enough CPU grunt to do voice recognition it could push the price into nasty territory. A cloud-assist feature is icky, but not terrifying, not least because bigger samples will probably make for bigger improvements in voice recognition.

Next comes the admission that “In addition, Samsung may collect and your device may capture voice commands and associated texts so that we can provide you with Voice Recognition features and evaluate and improve the features.”

It gets worse in this final sentence:

Please be aware that if your spoken words include personal or other sensitive information, that information will be among the data captured and transmitted to a third party through your use of Voice Recognition.

Which is downright nasty, as it suggests that if you use internet banking on my Samsung tellie and speak the password, the Korean company and/or its service providers have a record of you intoning “123456” on a regular basis. Assuming you're one of many using the world's dumbest password.

And let's not even begin to ponder how the sets' cameras and fitness services might use that data, or the conclusions they would draw, if a program moves to amorous activity on the sofa.

Worse still, this all happens even if you don't turn voice recognition on, as Samsung says: “If you do not enable Voice Recognition, you will not be able to use interactive voice recognition features, although you may be able to control your TV using certain predefined voice commands. While Samsung will not collect your spoken word, Samsung may still collect associated texts and other usage data so that we can evaluate the performance of the feature and improve it.”

Samsung's responded to widespread discussion of its privacy policy by insisting the data it collects is encrypted and cannot be accessed or used by unauthorised parties.

But of course Anthem Healthcare, Target, Sony (Pictures entertainment and the Playstation arm) and myriad others have all made similar pledges about the effectiveness of their security.

What's that you say? Getting up and finding the remote sounds like a splendid idea?

Too right. And some tinnies and crisps, mate ... ®