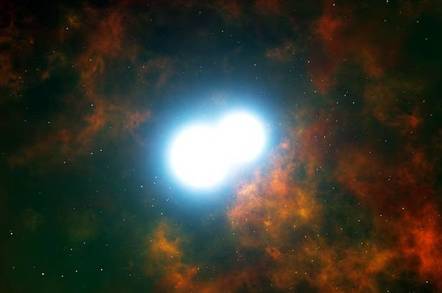 Pics A boffin called Boffin and other scientists at the European Southern Observatory say they have spotted an astronomical first: two doomed white dwarf stars that will likely spark a supernova when they collide.

The puny pair, in the planetary nebula* Henize 2-428, will crash into each other in about 700 million years, we're told. Their cosmic pileup will likely form a type 1a supernova, spewing raw material across its galaxy.

The discovery was made by Henri Boffin, ESO fellow David Jones and their colleagues, and revealed today in Nature.

"Until now, the formation of supernovae Type Ia by the merging of two white dwarfs was purely theoretical," said Jones. “The pair of stars in Henize 2-428 is the real thing.”

The accidental find came as the team studied oddly shaped planetary nebula. Many of these spectacular formations are created when as a sun goes into its red giant phase and blasts a shell of ionized matter out into space. The unusual shape of Henize 2-428 nebula put it on the list for study. 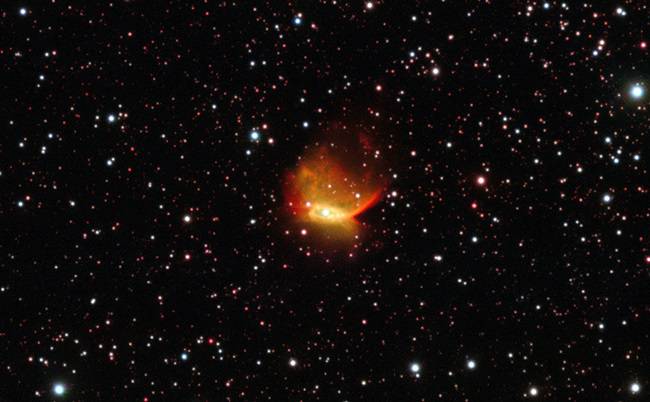 “When we looked at this object’s central star with ESO’s Very Large Telescope, we found not just one but a pair of stars at the heart of this strangely lopsided glowing cloud,” said coauthor Dr Boffin (don't start).

"It's an extremely enigmatic system," said team leader Miguel Santander-García. "It will have important repercussions for the study of supernovae Type Ia, which are widely used to measure astronomical distances and were key to the discovery that the expansion of the Universe is accelerating due to dark energy." ®

* Yes, almost everyone in the astronomy community thinks "planetary nebula" is a stupid name for something that has nothing to do with planets but it's traditional.

When 18th century telescopes first spotted big blotches in the sky, they were assumed to be planets, and were thus named by William Herschel, the man behind Uranus. A century later and better telescopes and techniques showed the mistake, but the name stuck. ®