GRUNTY CHIMPS 'blend in among locals' after moving to Scotland 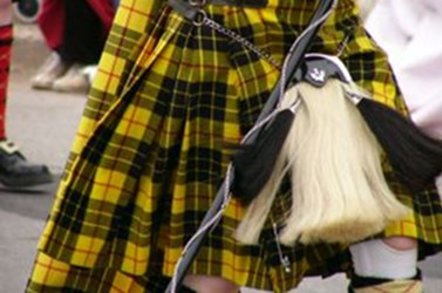 Chimps imported to a Scottish zoo have learned to grunt like the locals, boffins have discovered, in a finding sure to wobble a few linguistic applecarts.

Nine immigrant primates from a safari park in the Netherlands had been accustomed to using high pitched moans to call for apples, their favourite food, but all this changed when they were housed with Scots apes.

A study published in hefty bio-boffinry mag Cell revealed that after three years together the Dutchies started to mimic the deep grunts from nine apes long resident in Edinburgh – the first evidence that chimps can re-learn referential calls.

“While non-human primates can produce vocalisations that refer to external objects in the environment, it is generally accepted that their acoustic structure is fixed and a product of arousal states,” the research claims.

It has been argued the apparent lack of “flexible control” in the make-up of referential vocalisations was the “key discontinuity” with language, a theory that now may have been, er, scotched.

The acoustic convergence “arose independently of preference for the food, and social network analyses indicated this only occurred after strong affiliative relationships with established between the original subgroups,” the boffins claimed.

They reckon the finding shows that primate calls are not purely determined by “arousal” and that the “socially learned nature of referential words in humans likely has evolutionary origins”.