Parts for Brit proto-mainframe EDSAC show up in USA 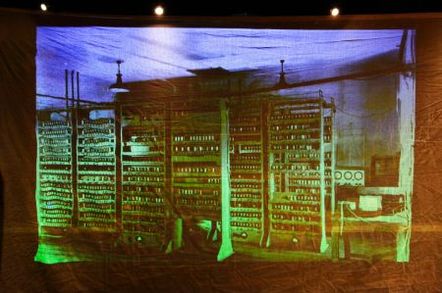 Original parts from the British proto-mainframe EDSAC have been found in the USA, boosting the project that aims to restore the computer to working order.

The UK's National Computing Museum is keen to reboot EDSAC because it is was an early British effort at creating a commercial computer, and spawned the LEO range considered technically superior to IBM's S/360 mainframe. Big Blue, however, managed to see off the LEO range and its maker by positioning its mainframe as a safer choice.

The museum says a part called “Chassis 1A” showed up in Pennsylvania, USA, in the possession of a chap named Robert Little who says he obtained in 1969 from one Dr Robert E Clark, then resident of Cambridge, UK.

Little told the Museum “I have a vague recollection of Dr Clark describing how he was bidding against the local scrap metal dealer when he won the EDSAC parts at auction.” The good Doctor apparently fancied the chassis might become striking book cases, but never quite got around to completing that project. Eventually he gave one to Little.

The Museum explains the significance of the find as follows:

The chassis were a vital component of EDSAC. Built in modular fashion, EDSAC had 12 vertical racks which could hold up to 14 individual horizontal chassis. Each chassis provided all or part of one of EDSAC’s logically distinct functional units. There were about 70 different types of chassis. Some were represented only once while others were replicated. Chassis type 1A is a Storage Regeneration Unit that keeps data recirculating through a short or long tank. There were 42 identical Store Regeneration Units.

Little's tale is the first the Museum has heard of the auction, which is said to have taken place in Cambridge in the late 1950s. Staff are therefore hopeful other people come forward with news of EDSAC pieces in their attics or garages.

Sadly, the newly-found specimen “... is quite distressed with corrosion and much of the wiring has broken away from tag strips,” according to the Museum's Andrew Herbert, who leads the EDSAC reconstruction effort. Herbert added that the chassis is probably therefore not usable, but “we hope to try to use some of the valves, if they are still functional, in our reconstructed EDSAC thus providing a very tangible connection with the original machine.” ®