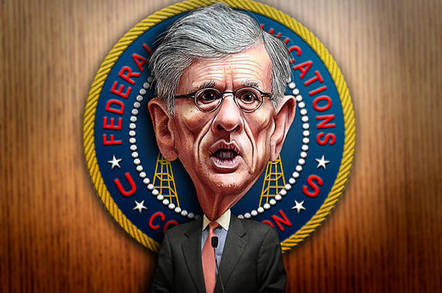 These protections, if approved, will try to ensure all traffic across the internet is treated equally, with no one able to build so-called "fast lanes" for rich websites.

It's feared these expensive web toll roads could be used to squeeze out startups that would otherwise become the next Netflix, for example. The ISPs argue websites should pay towards the networking kit carrying their packets.

Following two days of vague leaks from the regulator's staff, the chairman was today unambiguous: "I am proposing that the FCC use its Title II authority to implement and enforce open internet protections."

These would represent "the strongest open internet protections ever proposed by the FCC", he continued, and act as "enforceable, bright-line rules [that] will ban paid prioritization, and the blocking and throttling of lawful content and services."

We already knew Wheeler was heading in this direction. Today, he added he would extend those rules beyond cables and wires to mobile broadband – a logical move given the ubiquity of smartphones but one that was not seen as crucial.

The statement (or rather, an op-ed in WiReD) comes a day before the rules will be provided to the other four commissioners at the FCC for review and before a vote on 26 February.

That Wheeler felt the need to publicize his proposal in a fashion magazine before making it available internally is a reflection of how divisive and partisan the issue of net neutrality, and the situation within the FCC, has become.

Even though this is a proposal from the FCC chairman to his commissioners, it is a virtual certainty that it will be approved 3-2 later this month, with votes against from Commissioners O'Rielly and Pai, both of whom can then be expected to write highly critical public statements.

Wheeler's move today also stymies last-minute efforts by the cable industry and Republicans in Congress to pass legislation that would tackle the biggest net neutrality concerns while limiting the FCC's future authority. That effort is now dead in the water since President Obama would veto it and the Democrats would not provide the votes to overturn such a veto.

The situation is still far from over, however. It is another virtual certainty that the rules will be challenged in court by cable companies. Verizon has been the most aggressive in the courts, but AT&T is also expected to put in a legal challenge. The grounds of which that challenge is based will depend on the details of the proposal itself – which still remain vague.

What it won't have

Recognizing this fact and in an effort to counteract the strongest arguments against Title II legislation, Wheeler highlights what he won't be proposing in the rules: "To preserve incentives for broadband operators to invest in their networks, my proposal will modernize Title II, tailoring it for the 21st century, in order to provide returns necessary to construct competitive networks. For example, there will be no rate regulation, no tariffs, no last-mile unbundling."

The reality remains, however, that the FCC will have to decide which parts of America's outdated laws (stemming from 1934) must be removed, or "fearbeared," in order to make net neutrality work for modern internet communications.

As to the extension of mobile broadband, that is likely to bring its own challenge. Telcos have been arguing for some time that data over wires and data over wireless should be handled differently, even though most people's experience these days is that the two are interchangeable thanks to mobile phones and laptops – a fact that Canada's regulator explicitly recognized earlier this month in its own net neutrality ruling.

It’s time to put in place rules to preserve the #OpenInternet that has become an indispensable part of our daily lives. #TitleII

One thing is certain: Wheeler faces a massive hard-fought fight, with big cable and Republicans on one side and internet freedom advocates and Democrats on the other. The public opinion fight has already been won; the more private legal and political is about to start. ®