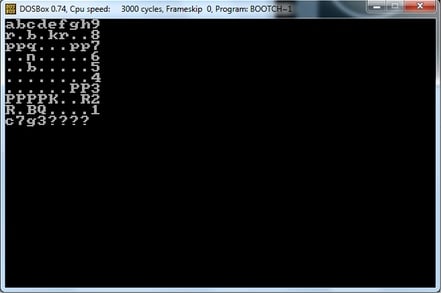 The previous record-holder, 1K ZX Chess, ran on the seminal Sinclair ZX81 which shipped with just 1K of RAM. 1K ZX Chess was lousy at the game, but its mere existence bestowed a little gravitas on the easy-to-ridicule ZX81.

Computers have of course sailed past the 1K RAM mark since, so while developers have occasionally had a lash at very small Chess implementations like Toledo Nanochess, there's been little need to write very small versions of the game.

That hasn't stopped Poudade from releasing “BootChess”, which he claims is “the smallest computer implementation of chess on any platform” and runs in “in a 512-byte x86 boot sector for Windows / Linux / OS X / DOS / BSD”. The source code is also available at that link. The game's no stunner: the screen shot at the top of the story shows its very crude text-based interface.

Poudade's claim is being questioned because BootChess appears not to allow castling and its AI player sometimes makes illegal moves.

That argument's not been settled: this match is a long way from checkmate. ®

We shall CRUSH you, puny ROBOT... with CHESS