How's this for customer service: Comcast calls bloke an A**HOLE – and even puts it in print

All because his wife asked to cancel their TV package 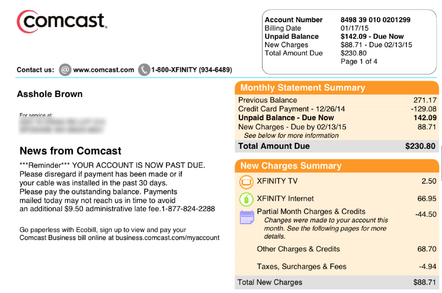 A Washington woman in the US has revealed how Comcast made her husband the butt of a joke – by changing his name to "Asshole" on their account.

Journalist Christopher Elliott reports that Lisa Brown contacted him after a Comcast employee changed her hubby Ricardo's name on their records to "Asshole Brown" – as is clear in the bill pictured above.

The story goes that Mrs Brown tried to have a TV package dropped from their cable broadband service to save some money each month.

She called the telco's customer call center, knowing she would have to pay US$60 (£40, AU$76) to do so, and was bounced to a specialist rep whose job is to talk people out of canceling or dropping packages. Brown stuck to her guns, and refused to change her mind.

Not long after, the couple received a bill to "Asshole Brown" at their home address.

Mrs Brown told Elliott she had phoned Comcast execs and visited its nearest store to complain, and to have the name change reversed – but apparently to no avail.

"I was never rude. I am shocked. This is unacceptable,” Mrs Brown told Elliott. "I am requesting everything back I paid Comcast for doing this to me."

She added that she believed the "retention specialist" she spoke to changed her partner's name on the account.

After Elliott, who fights for consumer rights, called up Comcast to check out the Browns' tale, the couple were eventually offered a $60 refund plus a refund on her previous two years of service and a further two years of broadband for free.

"We have spoken with our customer and apologized for this completely unacceptable and inappropriate name change," said Steve Kipp, Comcast’s vice president of communications for the Washington region, in a statement to the media.

"We have zero tolerance for this type of disrespectful behavior and are conducting a thorough investigation to determine what happened. We are working with our customer to make this right and will take appropriate steps to prevent this from happening again."

This means Comcast's customer service reps have once again been exposed for bad behavior. Last year a bloke recorded and posted an unpleasant service call with a Comcast agent.

The ISP was also sued this month by a subscriber who claimed Comcast reps subjected him to an unauthorized credit check. ®