The new Falcon Heavy: MOST POWERFUL ROCKET since the Apollo moonshots

OK we're a bit late, have some CGI while you wait - SpaceX 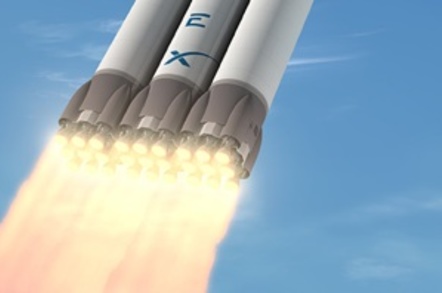 SpaceX has released a video animation of its Falcon Heavy, the mega-rocket of "scale and capability unequalled by any other currently flying".

Falcon Heavy is still to make its maiden voyage, but when it does the lift off thrust will total nearly four million pounds, equal to fifteen Boeing 747 jet liners at full power, said SpaceX.

The intention is to create a rocket that can lift large amounts of cargo into space at low cost.

In the video, all boosters return safely to Earth. Each of Falcon Heavy’s boosters is equivalent to the first stage of a Falcon 9 rocket.

Earlier this month SpaceX failed to land its Falcon 9 rocket on a floating hovership in the Atlantic Ocean.

Once SpaceX is able to land the rockets, the potential costs of Falcon Heavy will be even cheaper.

The Falcon Heavy was originally scheduled for its first test flight in late 2013 or 2014. SpaceX intends to launch the mega-rockets later this year. ®