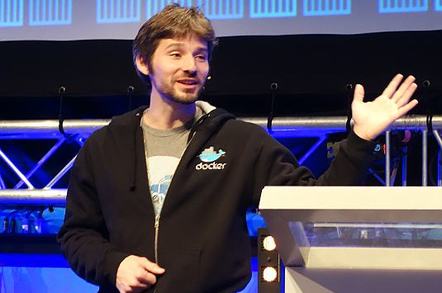 The Docker project has been re-organised following last year’s rapid success, with the names of folk filling the positions of chief architect, chief maintainer and chief operator being announced on Wednesday.

Hykes will continue in his role as chief technology officer of Docker Inc, but as chief architect will steer general direction, design principles and architecture.

Crosby will be tasked with maintaining quality, covering aspects like security, stability, usability and performance.

Francia is responsible for day to day operations, including communications between contributors and tracking release schedules.

Working on the NoSQL database MongoDb, Francia had furthered that project's interests in the fields of evangelism, integration and language.

The re-org follows an explosive 12 months for Docker, the Linux container project that actually began in 2013. Project contributors doubled to more than 740, with half of the 5,000 project pull requests coming from people who do not work for Docker Inc, the commercial patron of the Docker project.

The project has produced 20,000 projects in UI, management frameworks and monitoring tools and more than 85,000 “Dockerised” applications.

Those signing up to and supporting Docker spanned such diverse and rival camps as Canonical, Red Hat, Amazon, Google and Microsoft.

With fantastic growth and adoption will come pressure to maintain and extend quality and control, and for Docker to not become a victim of its success.

Gartner reckoned in January that Docker Linux containers are mature enough for use on private and public platforms as a service but "disappoint" on secure administration and management, as well as common controls for confidentiality, integrity and availability.”

The idea is to make Docker more open and accessible, scalable and to let Docker grow without need for painful refactoring of code, the project said. ®