No comment from Big Blue or our sources, though 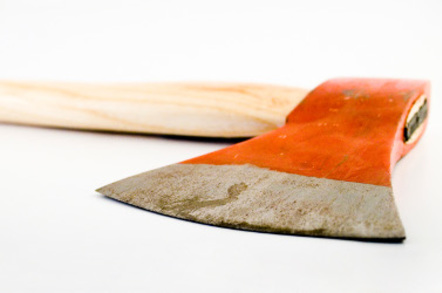 Updated IBM is reportedly planning to jettison 118,000 workers to counter 11 quarters of declining sales and the impact of shifting industry demand – which, if true, would make it one of the biggest corporate culls on record.

El Chan recently broke the huge divisional revamp at Big Blue in a worldwide exclusive, with a series of new units set to replace the old world computing structure set up on lines of hardware, software and services.

Well-placed industry sources told us job cuts were inevitable, and could be substantial, potentially nearing the scale of HP’s mass redundancy programme that will eventually see 55k people leave by the end of 2015.

However, according to Forbes this weekend, IBM is expunging so much more – up to 26 per cent of its 435k strong base of employees, under a reorganisation effort dubbed Project Chrome.

The mega lay-off is to accelerate the transformation of the business, and staff around the globe will this week get offered redundancy packages, and leave the organisation by the end of next month, the report claimed.

This would dwarf IBM’s most significant job cutting manoeuvre on record: it axed 60,000 heads in 1993.

The very effort required in getting more than 100k people out of the door by the end of next month sounds like a mission impossible, and, IF correct, a recipe for disaster for both channel partners and customers.

Cisco last year chopped 6,000 people and hired 7,000 new ones with a different set of skills to sell in a cloudy era. The size of this change seemed substantial…

Vendors and channel partners need to keep the traditional business spinning, while opening the taps on managed services and cloud revenues. That means dumping a load of old world talent wouldn't be sensible.

Our sources expected IBM to open up on the re-org last week when it outlined calendar Q4 financials, but both CEO Ginni Rometty and any related information were missing on the call with analysts.

Industry people are now betting further clarity will come out during IBM’s analyst meeting next month.

In any event, last week’s results provided further evidence that Big Blue cannot continue as it has been; sales were down 12 per cent in the quarter to $24.1bn and net profit declined 11.3 per cent to $5.5bn.

Every division was down in the quarter – and while IBM talks up its cloud haul, determining how much of this revenue is new or cannibalised from existing streams is a tough one.

CEO Ginni Rometty showed not all was well when she abandoned her predecessor Sam Palmisano’s target of $20 EPS for 2015 back in October.

Our people close to IBM were unable to shed any light on the expected numbers of redundancies, but reiterated they will be substantial.

“Global Services is inefficient and cumbersome, and IBM has not minimised costs and layers of management in the acquisitions it has made - it has got to become leaner and meaner,” one told The Channel.

This will not be a quick about-turn, and is likely to take 18 months to two years.

According to the Endicott Alliance, an IBM employee organisation, there is no information to confirm the 100k plus redundancies and it urged some media caution.

“But as you all know, anything can happen at IBM… and this is the time of year that IBM cuts jobs.”

We called IBM but it refused to comment, branding the job cuts as mere “speculation”.

IBM has released a statement:

"IBM does not comment on rumors or speculation. However, we’ll make an exception when the speculation is stupid. That’s the case here, where an industry gadfly is trying to make noise about how IBM is about to lay off 26 percent of its workforce. That’s over 100,000 people, which is totally ludicrous.

"The fact is that IBM already announced, after 3Q earnings report, that the company would take a $600m charge for restructuring. That’s several thousand people. Not 10,000, or 100,000. Moreover, IBM currently has job postings for more than 10,000 professionals worldwide, with more than half of them in growth areas such as cloud, analytics, security and mobile technologies.

"A little perspective on IBM’s earnings is in order. The company still makes huge profit… $21 billion in operating pre-tax profit last year. And IBM’s “strategic imperatives” represent 27 per cent ( and growing ) of the company’s total revenue… $25 billion in revenues, up 16 percent. We have high growth in a substantial portion of the portfolio, and those areas (CAMSS) have better-than-normal margins in areas that matter most to clients today — that’s the heart of the IBM transformation." ®