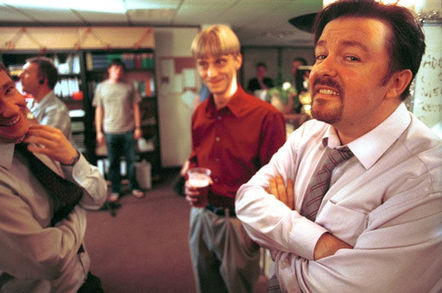 Microsoft let slip a few more details of its plans for the company's Office productivity suite on Thursday, including hints about when we can expect the next major version of its desktop suite to land.

Most of the Office talk at Wednesday's Windows 10 preview event in Redmond focused on the touch-centric Office for Windows 10 apps – the "universal apps" that Microsoft claims will run equally well on PCs, tablets, and phones.

These fondle-friendly versions of Word, Excel, PowerPoint, Outlook, and OneNote will come preinstalled on small-screen tablets and phones running Windows 10 and they will be available for download from the Windows Store for other types of Windows 10 devices.

But they're really just lightweight versions of the familiar core Office applications and they won't have all of the functionality of the traditional desktop versions. To get an idea of what that means, compare the Windows Store version of OneNote to the desktop OneNote 2013 application.

Never fear, though. In a blog post on Thursday, head Office marketeer Julia White said Microsoft is beavering away on the next major version of the full Office suite, which will be called – unsurprisingly – Office 2016.

White had little to share on how Office 2016 will differ from the current version, Office 2013, except that it will include "compelling new experiences." She did say, however, that this will be a direct continuation of past versions of Office, "best suited for a PC with keyboard and mouse."

That presumably means that whatever touch controls Redmond has cooked up for the universal app versions of the suite will not be ported across to the desktop versions. Similarly, while Office 2013 attempted to introduce a few new controls to make the applications more touch-friendly, it was a half-hearted gesture and didn't improve the touchscreen experience by much.

There was no word on pricing for Office 2016 and no hard release schedule was given, but White said to expect the new suite to hit general availability in the second half of 2015.

When The Reg asked Microsoft what the licensing model for the new suite would be – would Office 365 subscribers get it first, or would there be a standalone, perpetual-license version at all? – we were told that more information would be available in the proverbial "coming months" and to watch the Office blogs.

Likewise, Redmond reps wouldn't tell us what the universal Office apps might cost if you downloaded them from the Windows Store, or again, whether an Office 365 subscription would be necessary to get the full document editing experience.

Microsoft did reiterate, however, that a new version of Office for Mac is definitely on its way. As has earlier been announced, a public beta of the as-yet-unnamed OS X version of the suite will kick off in the first half of 2015, with general availability expected in the second half.

A Microsoft spokesperson did say, however, that commercial and consumer Office 365 subscribers would be able to upgrade to the new Mac version at no additional cost, and that a perpetual-license version of Office for Mac would be available in the same timeframe. So, fingers crossed, it's likely there won't be any significant licensing changes for Office 2016 for Windows, either. ®