FIVE Things (NOT 10: these are REAL) from the WINDOWS 10 event 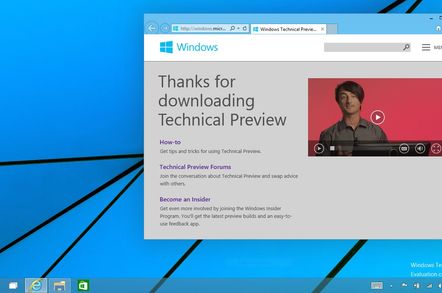 Analysis Microsoft offered a teaser of its work across its three main platforms yesterday, enough to give us an insight into how well Operation Relevance is going. It’s very much a work in progress. Here are the five key points on Windows 10 and the accompanying strategy.

The challenge is to get the cash rolling in again. The Sinofsky legacy is often compared to the Vista debacle – but in fact, it’s worse. Business actually bought Vista. Adoption rates of Windows 8 last year were lower. And the misery has dragged on for about the same amount of time.

This means Microsoft needs to get business users upgrading again – 85 per cent of installations run Windows 7 or earlier – but without unnecessarily pissing off the minority who are happy with the 8.x Sinofsky’d Windows 8.0/8.1 design.

Microsoft is going to do this by writing off next year’s Windows upgrade revenue. The inducement is that upgrades from Windows 7 to Windows 10 will be free, for a year. Microsoft had already hinted Windows 10 would be free for Windows 8.x users – but not for Windows 7 bods. Dramatic gestures are needed to win over those Win7 and XP installations.

Many readers reckon all Microsoft needs to do to get Windows rolling again is restore the Start menu and add a “boot to desktop” – the latter is easier, and no longer needs a registry tweak.

This is true, but that still leaves the “SinofskyWin” world and the legacy Win32 world as two unrelated spheres living uncomfortably alongside each other, with settings scattered at random between the two. Joe Belfiore showed us that the Control Panel is more coherent, touch friendly, but still recognisably derived from the classic Windows.

Microsoft also needs to bridge another chasm: the one between the Noddy world of "Modern" applications – which are really no more functional than toys or widgets, really – and the legacy world of rich, full featured Win32 applications, such as Photoshop or Outlook.

This is why we were shown Universal versions of the Office applications, touch-friendly apps that run across the three platforms and which are a lot more functional. So, for example, the Universal Modern version of Word contains a Review ribbon that you can pin in place. And being Universal, it runs on both tablet and smartphone.

This is all sensible stuff. Just quite how functional these Modern Universal Apps are, we couldn’t tell from the fleeting demo. You only know when you want to use the feature you need and find that it’s missing – and Office has accreted 25 years of hairy and obscure features. So, for example, will the new Outlook app support custom forms, or allow you to add custom folders to Tasks? Businesses need more detail – but this was a signpost, not a briefing.

4. Nobody talks to Cortana

Microsoft is hugely proud of virtual assistant Cortana and it has been injected into almost every new feature demonstrated. Cortana will offer its “intelligence” in the most unlikely places – like the Address Bar of the new browser. But... why? Since PCs became ubiquitous in offices, they are much quieter places than they used to be.

Some even regard phone calls as obtrusive. I can only deduce that the Microsoft execs who are so enthusiastic about Cortana don’t realise this. They must spend a lot of time commuting to work in cars (where Cortana is a safe and genuinely useful UI) or barking orders at underlings.

The fact is: most people, most of the time, won’t be talking to a machine. Sorry, Microsoft, but you may have over-estimated the appeal of Cortana. Hire some anthropologists.

5. 'We have another gear, besides Blind Panic Mode'

For me, this is the most interesting takeaway from the Windows 10 event. For three decades, Microsoft has responded to competitive pressure by panicking, and then Doing Something Stupid. It responded to the internet with Bill’s “Internet Tidal Wave” memo. Aka Exhibit 20 in United States v. Microsoft Corp. (PDF). The consequences of that – action from the competition authorities on bundling – only just expired last year.

On a smaller scale, Redmond responded to justified security concerns by announcing TCPA (Trusted Computing Platform Alliance), or Palladium. Remember that? And it responded to the iPad by allowing Sinofsky to run amok. Hence the charge of the Metro brigade, forcing unnecessary pain and unwanted upgrades on IT managers and causing huge confusion amongst users. The justification was that Microsoft needed to “brute force” an app ecosystem into existence – for without one, it would be left behind.

Few companies work best in Panic Mode. Maybe Microsoft, too, works much better when it’s not Panicking? Perhaps it has found another gear, one marked Relentless Grind? Microsoft has certainly been helped by the plateau in tablet sales. iPads and cheap ‘droid tablets aren’t going to be Windows' nemesis, just a complement to the bunch of devices most of us have in the home or office.

For the past few years, smug pundits have gleefully pointed out that mobile devices sell more than laptops, and asked, "What, you're still here, Microsoft?" They don't do this as much now.

So, all in all, there’s no need to Panic. Microsoft can respond through evolution, not revolution, and there's no blind determinism to those device numbers. The world isn't as simple.

Microsoft ducked some questions yesterday. It didn’t shed any light on what happens to its ARM Windows, Windows RT. That didn’t get a mention at all. But the proposition “write once, run on three popular platforms” (desktops, mobile devices and Xbox) is what your correspondent argued should have been in place in 2012.