'ThunderStruck' – going supersonic soon in a stratosphere near you

Behold our CAD-tastic work in progress 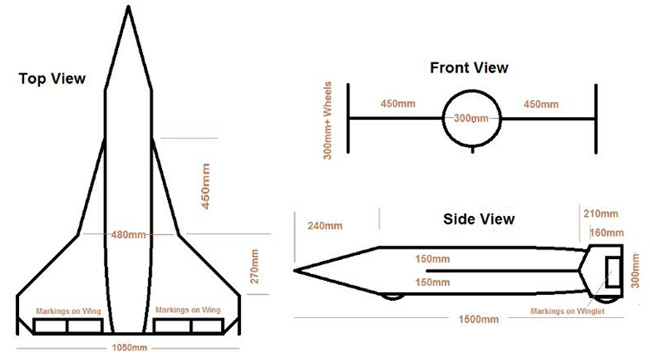 Regarding the ThunderStruck aircraft design, it's a work in progress and Robert asked us to note the current CAD plans are preliminary. Above are the plans for a half-sized model currently under construction, and he outlined the basic full-fat concept thus:

The airframe will be a compressed carbon fibre construction and will be a modified delta wing. The craft will be a central square (cross-section) fuselage with a "cranked arrow" wing design. It will need to go fast so there will be the mandatory spike at the front.

There will be winglets top and bottom of the wing with rear twin rudders. The winglets will stop a lot of the vortex issues and the lower section will house the wheels for the landing. The wings will have both elevators and ailerons at the rear. Flaps will be looked at carefully for the final craft but ideas for flaps and positioning for them are still in the design stage.

What's interesting here is the idea of having a moving avionics package "via a motor and screw system" to adjust the centre of gravity on the fly. The vehicle will also carry ballast - "possibly a bladder of antifreeze" - which can be dumped to further adjust the C of G.

Well, we wish Robert and Jason well with their flight, and lest you doubt they have the Right Stuff for the mission, we direct you to their brief biogs.

Jason, meanwhile, as well as having "inherited his father's good looks", has been a HAM radio operator since he was nine years old, did his first first HAB launch and recovery at the same age and is a cadet member of the Australian Air League – Hornets Squadron in Riverwood, Sydney.

Between them, father and son have 19 successful HAB flights under their belts, including a couple in Croatia.