Wizard of Oz OFFICIALLY 'most significant movie' EVER, says PNAS 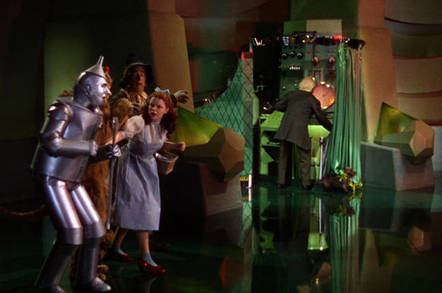 Researchers have used an interesting yardstick to determine that The Wizard of Oz is the most "significant" US movie ever, pipping Star Wars and Psycho into second and third spots in the significance league table.

Forget the critics' opinion, audience figures or box office take: what really sets a film apart is the number of times it's later referenced in other moving pictures.

That's according to a Northwestern University team led by Luís Amaral, which set out to determine what criterion best predicted a work's inclusion in the US Library of Congress's National Film Registry as being "culturally, historically or aesthetically significant".

After conducting a "a big data study of 15,425 US-produced films listed in the Internet Movie Database (IMDb)", which applied both subjective metrics - "(critical reviews, awards, public opinion) and objective (citations, box office sales)" - the conclusion was that these weren't as accurate in predicting Film Registry glory as how many nods a work received in subsequent flicks.

Amaral said: "Directors keep coming back to movies that are significant. If you show a little bit from 'Pscyho,' such as referencing the shower scene, you are putting that whole movie in front of the viewer of the new movie."

The method proved accurate "especially in movies 25 years old or older" - presumably because it takes a while to rack up tips of the hat from other filmmakers. Unsurprisingly, then, the fourth and fifth most significant silver screen outings were Casablanca and Gone With the Wind.

Amaral's ultimate aim is to develop a method for determining "the most significant scientific papers".

He explained: "More than 1 million scientific papers are published each year worldwide. It can be difficult to distinguish a good scientific paper from an average one, much like the movies. My next goal is to develop a good measure of scientific citations to get inside what is going on in the scientific literature."

Readers can judge for themselves the significance of the Northwestern University study - dubbed Cross-evaluation of metrics to estimate the significance of creative works - when it appears in Proceedings of the National Academy of Sciences (PNAS). ®

Star Wars movie to start shooting in UK this summer

No spoilers Let me tell you about my mother

A great disturbance in the Force

From post-coital squid to high-res Playboy bunnies: The 2012 'IT angle?!' quiz

Test your knowledge of the year's most stimulating stories