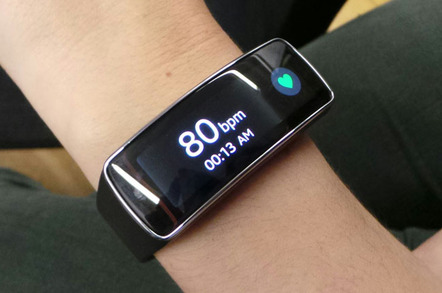 The US Food and Drug Administration (FDA) has published draft rules for wearable gadget makers to follow if they want their stuff classified as "general wellness" devices by the watchdog.

By "general wellness", the regulator means monitoring basic things like heart rates and distances walked each day, as opposed to vital medical equipment and treatments.

Getting this classification would be relatively easy and, for now, not mandatory. It would signal that the wearable is good for helping to live a healthy life rather than, say, cure the owner of a particular disease.

This is important if you, as a gadget maker, are sued by customers after your wearable fails to eradicate their type-2 diabetes, or similar. In response to such a lawsuit, you can whip our your "general wellness" classification, and argue buyers were fully aware of the capabilities of the wearable.

Of course, if you claim your wrist-puter or in-shoe gadget can cure cancer, or something like that, you'll need an FDA-approved classification reserved for medical devices, which need extensive testing and are much harder to obtain thanks to stricter regulations (as you'd expect.)

In other words, this draft guidance [PDF], issued on Tuesday, allows the FDA to draw a line in the sand between off-the-shelf simple wearables and medical machines – defining what manufacturers can and can't claim unless they jump through all the hoops medical equipment makers must do.

You're invited to send in comments on the proposed rules within the next 90 days.

Right now, wearables are considered general consumer devices by the US government, which have their own safety laws. That may change, although the agency's draft states:

FDA's guidance documents, including this guidance, do not establish legally enforceable responsibilities. Instead, guidances describe the agency's current thinking on a topic and should be viewed only as recommendations, unless specific regulatory or statutory requirements are cited. The use of the word "should" in agency guidance means that something is suggested or recommended, but not required.

Under the draft rules, a device to measure weight and log exercise routines would be classified as general wellness, but not if the device is pitched as a cure for obesity. Devices can be said to "help reduce the risk of" or "help living well with" conditions so long as they are not pitched as ways to diagnose or fully treat diseases.

Similarly, a device can be pitched as tool for relaxation and getting a good night's sleep, but can not be touted as treatments for specific anxiety disorders or other mental health conditions.

Finally, the devices must meet the definition of "low risk" to personal safety, forbidding invasive procedures such as implants or other activities that could pose a health risk to the user – such as UV radiation or lasers. Sun lamps hooked up to the internet-of-things would be problematic, for example.

The draft rules come as wearable gadgets promising to make your life healthier and happier continue flooding into stores. At CES 2015, tech giants were lining up to tout wearable bands, and Apple is set to enter the arena this year when it launches the health-monitoring Apple Watch. ®