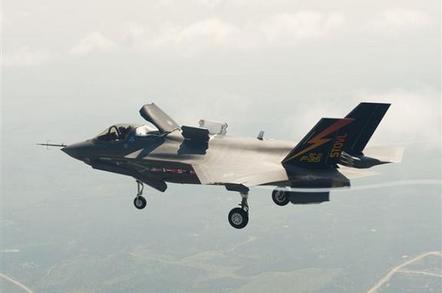 China now knows what most people in the west are catching up with: that the F-35 Joint Strike Fighter is a lemon.

The latest round of managed information release by Edward Snowden via Spiegel (one of a series) includes the snippet that Chinese security services copied “terabytes” of data about the aircraft.

The latest leak confirms the scale of the data theft, which emerged in US media such as The Washington Times March 2014.

As that report notes, the Defence Science Board at the Pentagon stated that “cyber attacks” had compromised F-35 design information.

In 2014, the leak was attributed to Lockheed Martin and was believed to have taken place in 2007, and in June 2013, Defense acquisitions boss Frank Kendall told the US Senate he was confident that F-35 data was now better protected.

China's F-20 development is still at an early enough stage that the Middle Kingdom could abandon it if it becomes too like the F-35: the aircraft has flown a couple of times, and is considered to be at the demonstrator stage.

Der Spiegel's release has inspired a rash of confected outrage around the world because spooks apparently make in-jokes about their work, if they think nobody's listening.

Hence, for some reason, as much attention is paid to quips referencing the movie There Will be Blood (“I drink your milkshake”) as to understanding the NSA's (and its Five Eyes partners') success or otherwise in cracking cryptography.

The leak also says in 2013, the NSA asked for US$1 billion just to strengthen its “network attack operations”, Der Spiegel states – which Vulture South regards as a possibly-reassuring detail. It suggests that the activities the NSA and its spook buddies love so much, like cracking crypto and disabling target networks, is still too difficult to be cheap or easy. ®