‘Whatever happened to Vladimir Putin?’ and other crap New Year prophesies

No satirical jokes about prophets, please (unless it’s Ian Watkins) 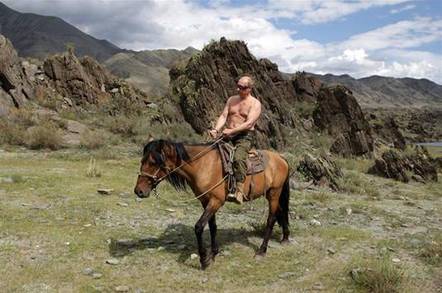 Something for the Weekend, Sir? Cross my palm with bitcoin, dearies, and I shall tell your fortune. Why not? Everyone else is doing it. Blogs, press releases and fashion celebrity know-nothings seem compelled to share their trend-spotting tips for the year, under the sneaky guise of making shit up.

To gauge how useless these annual predictions can be, for a laugh the other night I watched a 15-year-old CNN video (VHS converted to DVD, I’ll have you know) of highlights from the New Year 2000 celebrations, edited down from its live coverage of the event. From one moustachioed CNN news anchor to the next, they took it in turns to talk inane and embarrassing bollocks while viewers were forced to stare at one firework display after another.

Being charitable, it’s probably best not to laugh too hard when one anchorman, talking over the fireworks in Red Square, mused about political changes that were taking place in Russia at the time. “What will happen to outgoing premier Vladimir Putin? His future hangs in the balance.”

There was also a lot of jokes made about the Y2K bug, about which I had entirely forgotten. Each CNN reporter stationed at key cities across the globe managed to take a pot-shot at the previous year’s IT doom-mongers, noting that the computer-controlled firework displays seemed to be working just fine and that none of the fairy lights had gone out.

Of course the lights were still on: the industry had spent the previous three years or so scouring systems for Y2K bugs and eliminating them where they existed. Predictions of computer chaos might have been unwarranted on 31 December 1999 but they weren’t back in 1997 when the code really began hitting the fan.

To make light of the cost and effort of fixing Y2K issues on the basis that, after they were fixed, “nothing happened”, is dickhead reasoning. It’s like rewiring the dodgy electricity cables when you move into an old home in need of modernisation, and then complaining that it was a waste of money because your house hasn’t burnt down since.

That said, IT companies can be the worst for making daft predictions for the new year even as we march towards the end of January. Just as occasional work acquaintances will continue to wish you a happy new year until mid-February on the basis that you haven’t bumped into them since last August, it seems it’s never to late to get into the "tech predictions for 2015" act.

Not that any of these predictions relate to actual events in the real world. For example, I haven’t read anyone predicting that a British prime minister would deliberately attempt to kill off the British IT industry by making data security a criminal offence. I mean, how likely is that? Ha ha, he’d have to be a right div!

Rather, the Mystic Mo’s* of computing tend to prognosticate trends that, by amazing coincidence, favour their own product lines. In my particular field of expertise, the startlingly self-serving Digital Publishing predictions for 2015 by digital publishing solutions provider Page Lizard represent an impressive case in point. Let’s have a look.

One disappointing aspect of this current bout of predictionitis from which marketeers in the IT industry are suffering is that their predictions lack any sense of intrigue. Where are the “tall dark strangers” and “women wearing red”? And where’s the humour?

For example, it is a running in-joke in publishing that the astrology columns in local newspapers are invariably compiled and written by the in-house work experience kid, under a some such alliterative byline as Deidre Devine or Simone Starr. The fact that readers don’t complain about the inaccuracy of the daft predictions despite them being made up on the spot by an unpaid 18-year-old between doing coffee rounds says a lot.

It also explains why every day at least one of the star signs will involve something about the Moon entering Uranus.

The only compelling prediction I’ve heard to date was one by a certain major newspaper’s managing editor, who reckons we will have TWO general elections in Britain this year. The second one will be prompted, he says, by an impossibly hung parliament, and that in this second election, all the main party leaders will be different from those in the first. So convinced is he by this prophesy that he has laid down a bet at the bookies.

I predict that more apps will move into the cloud, and I predict that the cloud will be even more rubbish – unreliable, inaccessible, insecure – than it is now. Say goodbye to all your data: wish it well in its new abode where you can no longer get to it.

I predict even vaster quantities of valuable IT investment cash and taxpayer contributions will be thrown at yet more tattooed beardy conmen by suited fools from local government and banks. I predict this cash will never be seen again.

I predict a massive explosion of new Internet of Things products. The most useful of these will be a cloud-connected zipper fly for men’s trousers.

I predict there will be more voice-activated products. I predict none of them will work.

I predict that the people will get lairy. It won’t be very pretty I tell thee.

I predict a riot.

Alistair Dabbs is a freelance technology tart, juggling IT journalism, editorial training and digital publishing. He promises to be suitably humbled if Page Lizard’s predictions, as far as they can be described as such, come true. Some of them deserve to come true, anyway: it’s about time those Android freeloaders began contributing towards innovative mobile app development.

* If you work out this lame name joke that loosely relates to prophesying, please don’t murder me.