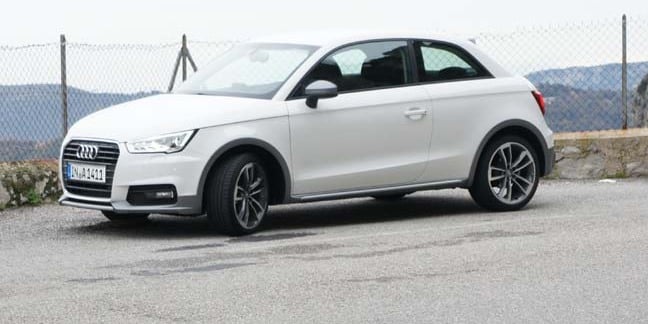 Vulture at the Wheel It’s all about the steering. The face-lifted Audi A1 has eschewed the trend to drive-by-wire and has mechanical steering with variable electrical assistance. I drove the new 1.0 three-cylinder petrol engine version, and over the miles what started as a nice little practical town car turned into a fun little toy.

Reviewing cars is the best job there is at The Register. Audi took me to Monaco for a couple of days and let me loose in the new car on the Col de Turini and neighbouring roads. An 84 km loop from and to Monaco, and what an amazing loop it was.

I must have driven for an hour of it without seeing another car and it's all the most amazing hairpins, but pretty well sighted. The car’s turning circle is 10.6 meters, well short of the Twingo’s 8.5 but good enough around the bends.

Forbidding: The Col de Turini is pretty much deserted at this time of year

The A1 isn’t a sports car but it more than held its own, pulling out of the uphill hairpins and being composed braking into the downhill ones.

There is two-stage Electronic Stabilization Control ESC with extended torque vectoring at the front axle, although what the bigger engined models have – and I didn’t miss – is the Audi drive select dynamic handling system or optional adjustable dampers.

Handling is probably helped by the engine weighing so little. Audi quote 88kg for the unit without ancillaries; its crankcase is made of cast aluminium. 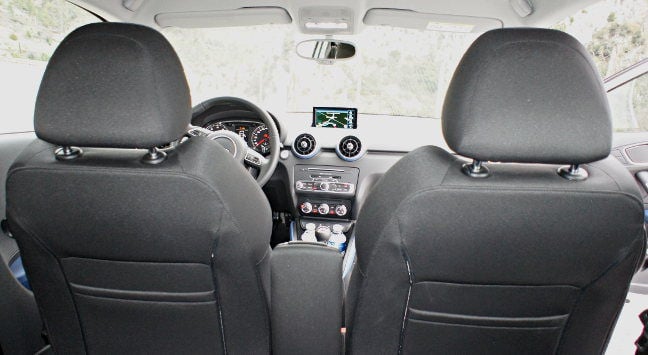 Efficient: If they did the interior in white, it'd look like an operating theatre

The obligatory presentation to introduce the car – made in German with an interpreter, even though I was the only person in the audience – made much of the steering and practice showed it to be no idle boast.

They told me: “Before the understeer threshold is reached, finely metered brake torque that is imperceptible is applied to the wheels at the inside of a curve. When power is applied, the excess torque flows to the outer wheel; this makes the car steer into bends and hairpins precisely. Within physical limits, the tendency to understeer is minimized by this ESC function,” adding, “a sub-function of ESC is the standard multicollision brake assist system. After a crash, it prevents continued uncontrolled rolling of the car and possibly a secondary collision.”

So it doesn’t feel as though the handling has been so tuned to be safe it robs the car of enthusiasm.

The A1 has been a great success for Audi; they’ve sold half a million of the things, mainly in Europe. The facelift comes four years after the introduction and mainly consists of the usual cosmetic surgery, nips and tucks, new colours, particularly for the wonderful eyeball vents.

Audi is very proud of the vents, and while you can’t get them with the LED temperature control in the middle like you can on the TT, a lot of the presentation was on the vents.

There are six “new” engines. That is new to Audi as Volkswagen group is the master of platforming and the efficient three cylinder 1.0 is already available in the Polo. I’ve recently tried the Fiat Twin Air, Ford Ecoboost and Renault offerings of 1.0 three cylinder turbos and the Audi isn’t as powerful or sonorous as the Ford or Fiat versions, the buzzy twin-air still leads the way. 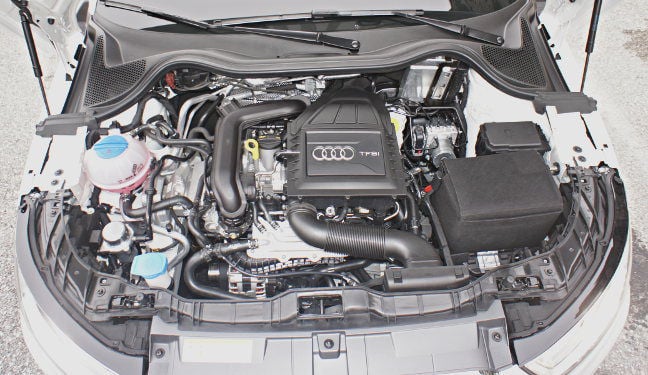 The 1.0 is, however, the engine I liked most. I tried the 1.6l diesel and thought it thrummy; there was none of the low-down torque which makes diesel attractive and the world is turning against the emissions from oil burners. I also briefly tried the 1.8l, which didn’t seem appreciably faster and is a lot more expensive.

While the small engines are new to Audi the concept is not entirely new; we’ve seen them before in other Volkswagen group cars.

All Volkswagen brands now under the spotlight