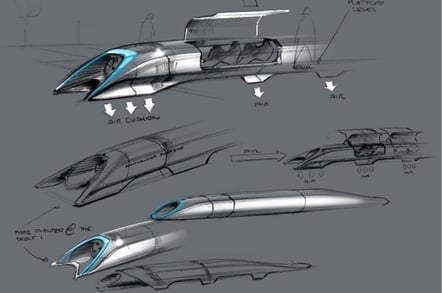 Some said SpaceX billionaire Elon Musk was mad when he wanted to build Hyperloop – a high-tech transport system described as "a cross between a Concorde and a rail gun." On Thursday, he vowed to construct it anyway.

Will be building a Hyperloop test track for companies and student teams to test out their pods. Most likely in Texas.

The Hyperloop design involves a tube through which passenger pods are boosted to near supersonic speeds by linear electric motors in a partial vacuum. Solar panels on top of the tube will provide more than enough power, according to plans published by Musk in 2013, and a Hyperloop connecting San Francisco and Los Angeles could cost $20 per person to ride, and make the trip in 35 minutes.

At the time Musk said he wasn't going to have time to build the thing himself, since battery-powered Tesla cars and SpaceX rocketry were taking up too much of his time. But it now appears Silicon Valley's answer to Hank Scorpio has decided to go ahead.

He is not alone, however. Following the publication of the Hyperloop blueprints, a group of engineers got together to bring the tubular plans to reality. Over 200 volunteered to work on the project in their own time, and 100 were selected to work at Hyperloop Transportation Technologies Inc (HTT).

So far the team has concluded that the Hyperloop idea is certainly possible from an engineering standpoint, with some tweaks. For example, the forces involved are manageable during acceleration, but the team says cornering could make passengers nauseous due to sideways G forces.

Musk is only committing to build a test track of his system, and wants to get students constructing pods to run through the prototype: the kids will be selected from those who enter the Society of Automotive Engineers Formula SAE competition.

One reason for Musk's change of heart over Hyperloop could be due to events in California. On January 6 the groundbreaking ceremony took place for the construction of a high-speed rail link between San Francisco and Los Angeles.

The rail link will cost an estimated $68.4bn and cost passengers $100 for a 75-minute ride. Musk thinks his system could link the two cities for a tenth of that cost, although he didn't figure property rights into that.

If a working Hyperloop system could be built then California may be persuaded to rip out its tracks and put tubes in instead. Alternatively someone else could try the system – HTT recommends an LA to Las Vegas line as it goes through desert that no one really cares about.

Doubters may say that Elon and his Musketeers have bitten off more than they can chew with Hyperloop, but it never pays to underestimate the man, and we may yet live to travel across the US in tubes. ®