Fujitsu: Slide your fingertip through our ring piece and show mice the finger 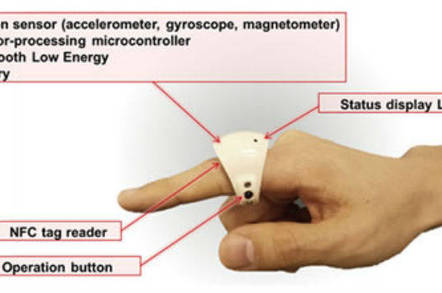 Fujitsu Laboratories has unveiled what it thinks is the control system of the future: a smart ring to replace the keyboard and mouse so many of us are slaves to.

The 10g (0.35oz) ring contains a near-field communications (NFC) module, low-power Bluetooth, an accelerometer, a gyroscope, and other sensors to track the motion of the wearer's finger in the air, and a button to activate stuff.

The device can replace a mouse – waving your finger while wearing the ring can move a pointer on a monitor or heads-up display – and it can be used to write text by drawing letters with your digit.

"By writing in the air with one's fingertip, operators can select menu options or make memos on photos that they take in the field," Fujitsu said in a statement.

"By applying proprietary technology that corrects the letterform tracings, Fujitsu Laboratories has been able to improve character recognition accuracy, enabling recognition of everything from numbers to Chinese characters."

The company claims the technology can recognize one's handwriting 95 per cent of the time with minimal training. The system can grok long-hand writing, so the user doesn't have to clearly write out each letter individually, and it either converts the text or stores it for later perusal.

In the industrial world, the NFC electronics in the ring could be used by workers using heads-up displays. Users would touch a machine with the ring and get a schematic or instructions displayed in their visor.

Stylish it isn’t, however – the Fujitsu ring makes a very definite fashion statement. There’s also the question of battery life, which is proving annoying for smartwatch users who are having to recharge every night.