Akram Atallah tells NamesCon everything is fine. And terrible. 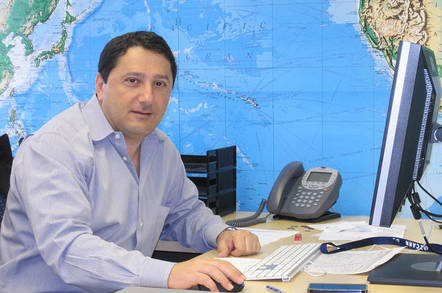 It's not easy being global DNS overseer ICANN right now.

The addition of hundreds of new generic top-level domains – gTLDs from .book to .ninja – has been an operational headache; the transition of the key IANA contract is put it under an unfavorable spotlight; and a recent hack of its staff admin systems has raised questions over its technical competence.

But everything is fine, and terrible, according to its Akram Atallah, ICANN's former chief operating officer and now president of the non-profit's global domains division.

Speaking at NamesCon 2015 in Las Vegas on Monday, Atallah maintained his usual flat tone while fielding questions about slow sales of domains using the new gTLDs, a lack of accountability at the organization, and newspaper editorials lambasting ICANN's abilities.

"New [gTLD] registries are still trying to find their footing," Atallah told the audience. "We are seeing a lot of new entrants." A takeoff in domain sales, expected following the launch of the new gTLDs, has been slower than expected, forcing ICANN to cut its revenue forecast earlier this year. It takes a cut from domain registries so weak sales hits the organization's financials.

"We were expecting applicants to make their new [gTLD] registries available sooner than they did," Atallah confessed. "And there need to be over 50,000 registrations before many of them start paying their fees." (Of the more than 450 new TLDs, just 12 of them have more than 50,000 registrations. New registries pay an annual flat fee of $25,000 to ICANN, and then 25 cents per domain transaction after the first 50,000.)

Atallah puts the delayed launches down to big brands watching and waiting for others to enter the domain market – for example, there's little point in snapping up theregister.news if few others buy into the gTLD.

"This is a new way of doing things online so it's mostly a competitive issue: a lot of them are sitting around the pool waiting for the first one to jump in," he said.

As for slow sales on launched gTLD registries? "If you look at the domains that have been more successful, they have been more targeted. I think that's what will make new gTLDs successful. A lot of applicants will have to go through iterations to get there but it will all happen in due course."

Atallah rejected the argument that ICANN should be using some of the millions it has made from the $185,000 application-fee-per-gTLD to build awareness of new extensions. "If they're not successful, applicants have to do a better job promoting themselves," he argued.

As for those millions – not just in excess application fees but also millions in auctions between applicants for the same dot-word – he refused to say how it would be spent, pointing to a vague future process that the ICANN Board will run and ask the internet community to help decide how it is spent.

Next page: Accountability? We've heard of it
Page:
Tips and corrections
4 Comments