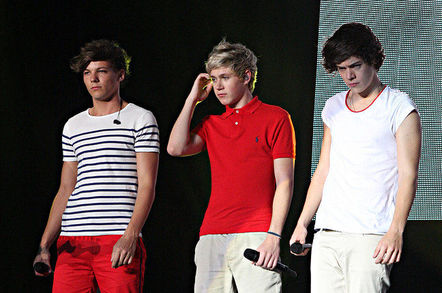 Harry Styles and his pals in One Direction have launched a denial of service attack on an open source coding conference in Cardiff, with the band maliciously pinging tens-of-thousands of its teenage fans at the city on the same day as DjangoCon 2015.

Organisers had planned the first UK version of the convention for people who code in Django, which powers websites like Instagram and Pinterest, in Cardiff in June.

That was until One Direction launched its tour attack and took down the event by announcing tour dates for Cardiff's Millennium Stadium on 5-6 June.

Now 140,000 One Direction fans have suddenly taken all the hotel accommodation in the city, leaving none for Django attendees.

Speculation is rife that the teenie-heartthrob band are fans of rival open source framework Ruby on Rails and planned their tour deliberately to sabotage the conference.

Daniele Procida, who has been responsible for organising the conference, said: "There is a funny side to this, but we’re having a hard time laughing at the moment."

The conference has now been brought forward two days, while attendees who are unable to make the rescheduled dates will be offered a full refund. ®