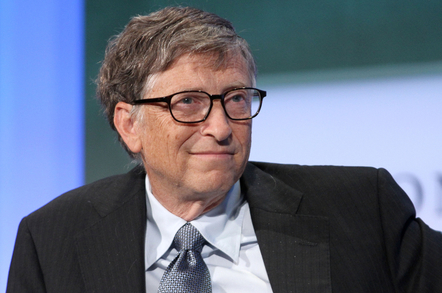 Haters might say the man responsible for bringing the world the Microsoft empire has finally had a taste of his own medicine, with Bill Gates admitting on Monday to having swallowed liquid poo. El Reg couldn't possibly comment.

In a blog post this week, Gates wrote about trialling a machine that turns faeces into drinking water.

"I watched the piles of faeces go up the conveyer belt and drop into a large bin," he wrote.

"They made their way through the machine, getting boiled and treated. A few minutes later I took a long taste of the end result: a glass of delicious drinking water."

He was touring a facility that processes human waste and produces water and electricity, part of the Gates Foundation’s effort to improve sanitation in poor countries.

Click to 1:53 in the video here for the money shot.

Regular readers might also remember some of Gates', err, other faecal interests. In March the foundation backed a waterless solar raygun portaloo that uses focused sunbeams to incinerate human excrement and turn it into a charcoal style substance with many different uses.

The invention was part of the foundation's “Reinvent the Toilet Challenge". ®