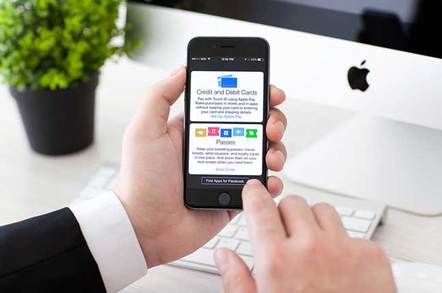 Analysis Apple's attempt to launch its NFC payment solution in the UK could be thwarted by some financial institutions' concerns over privacy and security issues surrounding Cupertino's "invasion" of the banking industry.

The system, which has been developed with the credit card companies, has been tried by two million iPhone 6 users in the US.

However, The Telegraph reports that UK adoption has been slowed by banks concerns over privacy, saying “some executives fear Apple Pay and the data it delivers to Apple could serve as a beachhead for an invasion of the banking industry".

Maybe they have looked at what Apple has done to the music and mobile phone industries and drawn conclusions from that. A battle between banks and Apple would certainly be interesting to watch.

Airing concerns about security, money laundering and financing of terrorism is a standard tactic employed by the banks when they want to slow the adoption of a new technology.

The banks are looking to roll out solutions they control, such as Barclays Pingit, or the financial industry working together on Paym, a UK mobile payment system provided by banks and building societies, with recipients identified by their mobile number.

Barclaycard is even experimenting with gloves. Which seems sensible in December but might look a little odd in August.

Many in the mobile money world have been hailing the advent of the Apple mobile money solution as the thing which will take NFC from merely a Good Idea to something people actually use.

The jury is still out on how successful the technology has been, with the major US pharmacies CVS and Rite-Aid refusing to take the mobile payment mechanism, and Pizza Hut saying it thinks the tech is still a bit pants.

However, an increasing number of retailers, including gas station giant Chevron and Disneyland, have moved to accept money through the system with Apple taking 0.15 per cent of the transaction.

Setting up Apple Pay on an iPhone 6 is simple, as it’s linked to a credit card and if the card they want to use is set up on their iTunes account, Jesus Phone owners can just select the option from within iTunes. If customers wish to use another card, they can photograph the card with the phone’s camera.