No one likes tangerines and no real Who fans like the Christmas special. There’s always far too much thrown in. Too many decorations on the tree, weighing it down. Too many nods and winks to traditional themes, not to mention the maudlin sentimentality! Who can forget the Narnia-inspired The Doctor, The Widow And The Wardrobe nonsense?

So I was thoroughly prepared to hate Santa. And then a funny thing happened, specifically Nick Frost. And he was brilliant. Not too saccharine, not too, ahem, frosty. 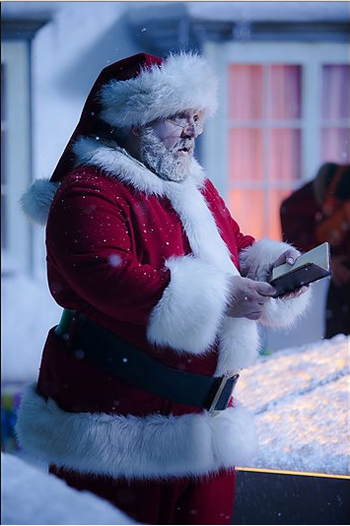 It's no secret that I've found Miss Goodie Two Shoes Oswald to be a complete pain for most of the season, but she provided the first actual LOL moment with her comment that she often has to use her imagination. It probably went over the heads of most younger viewers, but was a welcome indication that Steven Moffat hasn't completely forgotten the adult fans despite the time of year.

But dear god there's no getting rid of Danny! Even though he's dead he still managed to pop up and be inane in two episodes. He'll probably still be faffing about in the background two or three companions down the line.

Attack of the Brussels sprouts was fun. They made properly sinister baddies. What could be more terrifying than not even knowing you were being killed by something inside your head controlling your thoughts? Although clearly Inception-inspired, it felt fresh. And was a handy knack for having your Santa and eating him... or something.

We've reached the end of Capaldi's first stint as the Doctor and he's really settled into the role. If Moffat & Co can leave Clara and the "big emotional questions" behind and take us on a real hunt for Gallifrey, viewers will be in for a proper treat.

Best thing about Last Christmas? It was mercifully free from any ageist claptrap about Capaldi not being a spring chicken! ®

Earl's Court is bigger on the inside than the outside

YES! It's the TARDIS PC!

'It doesn't roll along on wheels, you know'