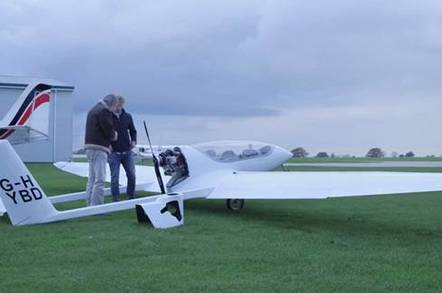 Video The first hydrocarbon/electric aircraft has taken to the skies over Southern England as part of trials to find out if such combo systems have a place in aviation's future.

The aircraft, a heavily modified microlight, uses a conventional four-stroke petrol engine as its main power source and an electric motor connected to a bank of 16 large lithium-polymer batteries built into the wings.

"Although hybrid cars have been available for more than a decade, what's been holding back the development of hybrid or fully-electric aircraft until now is battery technology," said Dr Paul Robertson of Cambridge's Department of Engineering, who led the project.

"Until recently, they have been too heavy and didn't have enough energy capacity. But with the advent of improved lithium-polymer batteries, similar to what you'd find in a laptop computer, hybrid aircraft – albeit at a small scale – are now starting to become viable."

The aircraft uses its petrol and electric engines simultaneously during takeoff, which is the most power-demanding part of any flight. Once the pilot reaches cruising altitude the electric engine can be switched over to power generation and recharge the batteries, or used to augment the petrol engine to save fuel.

In tests at the Sywell Aerodrome, near Northampton, the latter dual engine mode cut petrol consumption by 30 per cent. The electric engine was also judged capable of getting the aircraft safely down in one piece should the petrol engine fail mid-flight.

No-one's suggesting you'll board a 737-H any time soon. The Cambridge boffins worked out that if you replaced the engines and fuel load of a commercial jet with electric motors and batteries you'd have enough energy for about 10 minutes of flight time, but hybrid engines could make sense as an economy measure.

"Our mission is to keep our sights on finding innovative solutions and technologies that solve our industry's toughest challenges and continually improve environmental performance," said Marty Bradley, Boeing's principal investigator for the program.

"Hybrid electric is one of several important elements of our research efforts, and we are learning more every day about the feasibility of these technologies and how they could be used in the future." ®

Interview Guillermo Rauch: 'One of the biggest performance issues that we see today is to do with advertising'