Q*bert: The Escher-inspired platform puzzler from 1982

You had to be elegant then, there was no brute force option

Gottlieb’s pinball heritage never quite left its videogame cabinet design, with their bespoke audio PCB sitting in the back and a "knocker coil" ready to bash the inside of the cabinet when Q*bert falls from the edge of those cubes. This jolly fellow is more than happy to show you more of the machine’s innards ...

David Tiel famously programmed the Votrax speech synthesizer to produce amusing, if slightly inadequate, speech effects. He managed to get a recognisable “hello” and “goodbye” from the hardware, but otherwise pieced together various phonemes to form expressions that, with a bit of imagination, could represent the six-character expletives Q*bert utters so regularly. The results weren’t brilliant, but in time would be as fondly remembered as the classic game mechanics. Here’s Q*bert-speak in revamped glory from his 2012 cameo in Wreck it Ralph.

Swearing would surface once more when searching for a suitable title for Gottlieb’s new videogame, with a first batch of test artwork released with @!#?@! as the official moniker. That was never going to work – pronunciation would have been too tricky to pin-down – and Lee’s alternative of Snots and Boogers didn’t find favour either, being too gross for the mass-market. Eventually, Hubert was reckoned upon as the alien’s name, which was twisted with the word cube and twisted once more to become Q*bert. 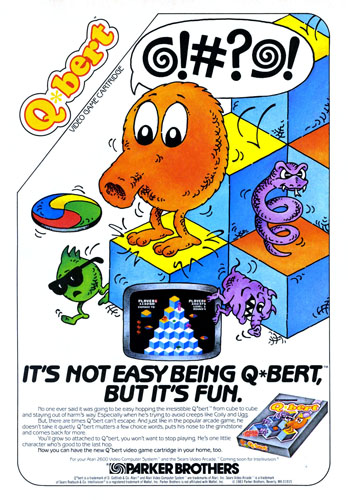 Parker Brothers secured the rights for home conversions, and proceeded to blitz the market with versions across most home systems. Not all of their efforts were superlative, with the Atari 2600 attempt incapable of re-creating the 3D illusion. Q*bert on Intellivision was better, but like other versions suffered from controllers that didn’t translate well to the isometric action.

For the most part though, Q*bert’s fairly low-tech requirements allowed it to convert successfully to home formats such as Colecovision, Commodore 64, and PC, though inevitably there was some disappointment when the vocal swearing didn’t make the translation. Control via keyboard could be a little difficult, and a mouse-mode worked surprisingly well when available, though Q*bert purists were never keen on the idea. 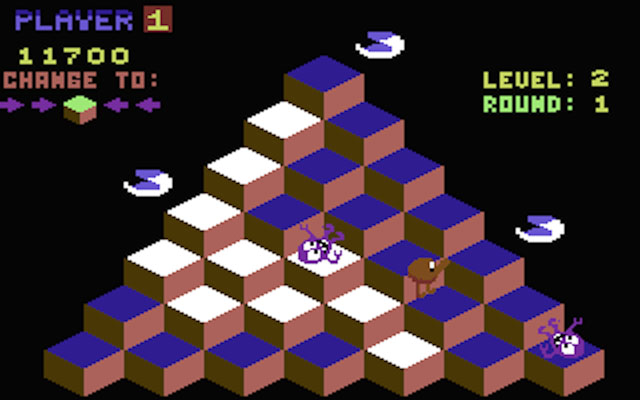 Stepping up on the Commodore 64

A bleepy bleepy standalone table-top game was released to further capitalise on the little alien’s popularity. Yet back in the arcade, a small but significant problem was occuring with Q*bert: after stage 9, the game doesn’t get any harder, so a well-practised player could continue ad infinitum on just one credit.