Stop me if you think that you've heard this one before 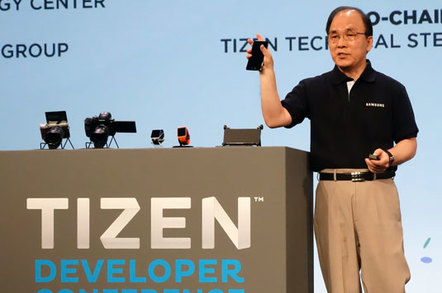 Hope springs eternal for Samsung and its Linux-based Tizen OS, which reportedly will find its way onto a smartphone early next year, despite repeated delays.

We've certainly heard similar stories before – many times, in fact. Samsung first said that it would release multiple Tizen-based phones in 2013. None emerged.

Never fear, the chaebol told us. Multiple carriers and device makers had signed on to work with Samsung on its Android-challenger OS. But none of the hardware companies would commit to building Tizen devices, and as the months rolled on, not even Samsung would release a commercial product.

Meanwhile, the Korean firm's erstwhile carrier partners, concerned about the repeated delays, bowed out, one by one.

Flash forward to this summer, when Samsung said it planned to launch a Tizen mobe in Russia and India. But the Tizen Developer Summit in Moscow came and went without the promised launch, and now it seems Russia has been scratched off Sammy's list of debut markets, too.

But it's never too late, we suppose, to make a Tizen phone happen. Samsung already has the OS running on its Gear line of smartwatches, so getting it working isn't the issue. In the past, Samsung has suggested that it's waiting for broader developer support before it ships a Tizen-based phone, but that would seem to be putting the cart before the horse.

More to the point, while Samsung dawdled, China's Xiaomi rocketed to prominence, quickly capturing the Number Three spot in the global smartphone market. Samsung can scarce afford to cede it any more ground.

The Korean firm isn't exactly counting on a home run with the Z1, either, as its specs sound much more paltry than the Model Z we've been hearing about throughout the year. It reportedly has a 480-by-800 pixel WVGA screen, a 1.2GHz dual-core processor, 768BM of RAM, and just 4GB of internal storage, making it a decidedly low-end piece of kit.

The dual-SIM device will reportedly run Tizen 2.3 and will include a Tizen Store marketplace for downloading apps – to the extent that any are available.

Samsung is yet again playing the optimist with regard to Tizen's future, too. Following the Z1 launch in India, it says it will release Tizen devices in China in February, with a formal launch in Korea to follow in the first half of 2015. ®