NuSTAR could solve the riddle of the flaming ice cube 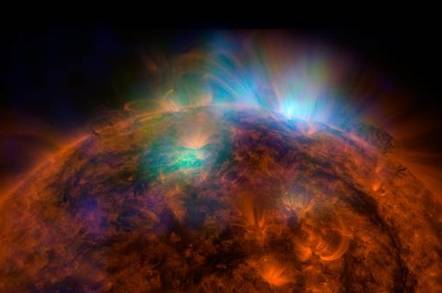 The Nuclear Spectroscopic Telescope Array (NuSTAR) was designed to probe the distant galaxy looking for black holes, but NASA has recently been aiming the orbiting instrument at the Sun to get a close-up view of our star's atmosphere.

"At first I thought the whole idea was crazy," said Fiona Harrison, principal investigator for NuSTAR at the California Institute of Technology. "Why would we have the most sensitive high energy X-ray telescope ever built, designed to peer deep into the universe, look at something in our own back yard?"

It took seven years of persuading, but Harrison was eventually convinced that NuSTAR could be used to solve a decades-old riddle about the Sun – namely, why its atmospheric temperature is so odd.

Scientists have postulated that the reason the outer part of the Sun is so hot can be accounted for by the existence of nanoflares. These are smaller versions of the coronal mass ejections that periodically burst from the Sun's surface, and it's thought they provide heat and power to the outer layer of our home star.

"NuSTAR will give us a unique look at the Sun, from the deepest to the highest parts of its atmosphere," said David Smith, a solar physicist and member of the NuSTAR team at University of California, Santa Cruz. "NuSTAR will be exquisitely sensitive to the faintest X-ray activity happening in the solar atmosphere, and that includes possible nanoflares."

The first image of the Sun's western quadrant, shown above, has now been taken and overlaid with data from NASA's Solar Dynamics Observatory (SDO). It shows patches of high-energy emissions in green and blue against the lower-energy red background, although calculations are still going on to see if these are, in fact, nanoflares. ®