Which means it's time for him to PAY UP, again 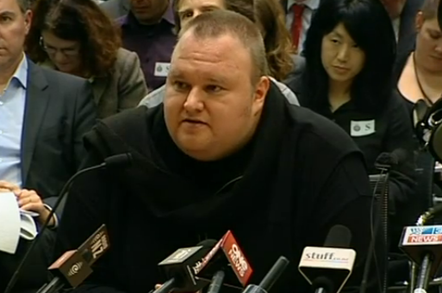 File-sharing kingpin and self-described pauper Kim Dotcom will need to cough up another NZ$35,000 ($26,900) after losing the latest round of his long-running legal battle before the country's Supreme Court.

The sum will go to cover the New Zealand government's costs to defend warrants that were issued for searches of properties belonging to rotund Mega baron Dotcom and his Megaupload cronies.

In February, an appeals court sided with prosecutors, saying "no miscarriage of justice occurred" in Dotcom's case.

In typically bombastic fashion, Dotcom and his attorneys vowed to appeal the matter to New Zealand's highest court. That court has now concurred with the earlier ruling, with only Chief Justice Dame Sian Elias offering a dissenting opinion from that of the other four judges.

"We agree with the Court of Appeal that the appellants were reasonably able to understand what the warrants related to and that the police were adequately informed of what they should be looking for," the Supremes said in an 80-page ruling. "Any issues relating to matters such as the way the search of the computers was conducted or the handling of irrelevant material should be addressed through other processes."

Naturally, Dotcom was disappointed in the final judgment and tweeted that only Dame Elias came to the right conclusions.

New Zealand Chief Justice Dame Elias got it right in both Supreme Court decisions in my case. She must be as frustrated as I am. #Wellington

Just where Dotcom will find the funds to cover the court costs in this latest legal drubbing is unclear. In November, he said that fighting his extradition to the US to face trial on copyright infringement, conspiracy, and money-laundering charges has consumed all of his remaining funds, describing himself as "officially broke."

That's probably just more typically Dotcomian hyperbole, although the Mega-maven's lifestyle has changed somewhat since authorities raided his New Zealand manse in 2012. At the time, CNN estimated the value of the property seized at $50m, including servers, cars, artworks, and weapons.

These days, Dotcom is out on bail pending the outcome of his various legal troubles, and while he is still living in his mansion, he has been expressly forbidden from tooling around in his helicopter. ®