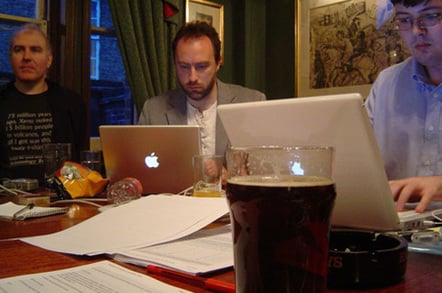 Wikipedia co-founder Jimmy Wales says he'll "start a foundation" to process a large amount of money he has received from the United Arab Emirates' regime.

Christmas came early for Wales, and Tim Berners-Lee, earlier this month when they shared a $1m cash award from the Gulf state. The "Sheikh Mohammed bin Rashid Al Maktoum Knowledge Award" is named after the veep of the UAE.

Emirates-based Wikipedians asked Wales why he hadn't mentioned the award, and accompanied the non-announcement with a non-pledge to highlight human rights abuses in the UAE.

"Your acceptance of the $500,000 in Dubai is the subject of discussion among Emiratis who are not in agreement with the current state of affairs in the UAE as it relates to human rights and freedom of speech," Wikipedia contributor M.al-A.UAE told Wales on his Talk Page.

The user pointed out deportations of academics and journalists who had documented civil rights in the state. He continues:

There is no freedom in the UAE Mr. Wales ... When you donate the $500,000 please do so openly by putting out press releases on these donations. There is no stronger message that you can send to the regime in my country, and others in Arab world, than publicly declaring that you stand with the people who do not enjoy basic human rights. This will send a strong message to governments that they can't place a price on human rights and for the silence of the West.

After several days of back and forth, Wales declared that he would be diverting the money to a new foundation - and that he'd planned to do so all along. Wales responded angrily to parallels between his UAE jackpot, and his work with the Kazakh government, details of which emerged two years ago.

Using its sovereign wealth fund, the Kazahkstan state funded an agency called "WikiBlim" to edit Kazahk-related pages. Wales created an award ("Wikipedian of the Year") for the former state official in charge of WikiBlim, Rauan Kenzhekhanuly, and the WMF donated to WikiBlim.

In 2012 Wales married Tony Blair's diary secretary, and Blair has a contract reportedly worth $13m with the Kazakh dictator. Wales has since shut down criticism of, and questions about, his association with the former UK PM, on his Talk Page.

The idea of "creating a Foundation" allows Wales to say he's donating the money to charity while retaining control over the distribution of the cash.

But what of Tim Berners-Lee, the "Greatest Living Briton"?

By email, we asked him two questions:

2. Will you be making any statement about the UAE’s human rights record?