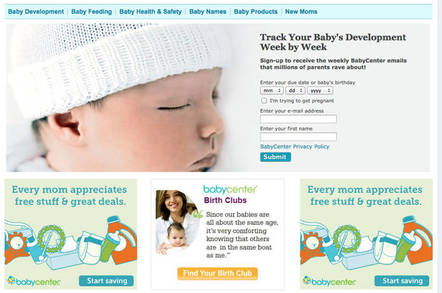 Johnson & Johnson has bought the right to .baby domains for $3.1m, beating Google and five other companies.

The bathroom cupboard filler intends to run the generic top-level domain-name as a closed shop, meaning that it will approve every new .baby domain. So don't expect to see Wholovesyou.baby, Youvecomealongway.baby or any of millions of bad pop lyrics any time soon. Think more baby.com – which the corporate also owns and runs.

As opposed to most top-level domains, which run a brief trademark-only registration period before opening it up to anyone with a credit card, Johnson and Johnson has a three-stage rollout plan for .baby.

First, only domains "relevant to the baby care industry" will be allowed to be registered and only if you are a subsidiary or affiliate of Johnson & Johnson. Then, the company's "existing business units and select licensees and partners" are allowed to register .baby domains.

And then, the company will "evaluate expanding the operations of the .BABY gTLD to permit registration by other registrants outside of licensees and strategic partners."

In the surest sign that big corporate has entered the domain name system, Johnson & Johnson holds out a limited number of registrations as a positive thing: "JJSI is confident that the number of domain name registrations will be less than 10,000 in the first three years of operation."

In winning the auction, the company beats the four biggest names in the gTLD market - Donuts, Famous Four, Minds+Machines and Radix - who have collectively applied for hundreds of new extensions.

Large corporates have largely avoided applying for generic names, going instead for their trademarked names, which is what makes .baby an interesting case study in the huge expansion underway at the top-level of the internet.

The auction, run by domain name overseer ICANN, is the 10th since June with a further 51 planned between now and March. At the same time, .MLS was won by the Canadian Real Estate Association for $3.4m. So far ICANN has pocketed over $30m in auction fees which it has still yet to disclose how it will spend. ®

Amazon may finally get its hands on .amazon after world's DNS overseer loses patience

ICANN tired of delay tactics from Brazil and Peru