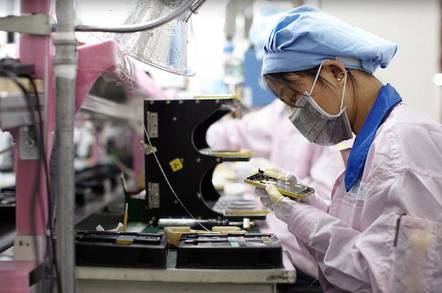 Apple has refuted claims made by the BBC’s Panorama programme that it is not working hard enough to protect the rights of workers.

Employers have to check ID cards to enforce laws on immigrant labour, but by keeping them they cause the workers to break laws about always carrying the identifiers.

As is usual for the secretive fruity company, Apple wasn’t prepared to be interviewed by the programme.

However, in a response to the broadcast, Apple senior vice president of operations, Jeff Williams, emailed UK employees to say that Apple had shared "facts and perspective" on the company's commitments to human rights with the BBC in advance, but that they were "clearly missing from its programme".

That email has been leaked to The Daily Telegraph.

Apple has undertaken to enforce a 60-hour maximum working week and claims that it has tracked the weekly hours of a million people in its supply chain, finding that 93 per cent of the instances were compliant.

The BBC has reported that Pegatron was “carefully investigating Panorama's claims and would take all necessary action if any deficiencies were found”.

While conditions for staff working on Apple products are no worse than those for people working on products for rival manufacturers, Apple has undertaken to root out abuses.

The BBC argues that it has failed to do so, while Apple claims that just walking away from troubled countries which exploit workers would not benefit them, particularly with reference to the Indonesian island of Bangka, where it is alleged that illegally mined tin enters the legal supply chain.

Williams told UK employees that to protect itself by not buying Indonesian tin would "be the lazy and cowardly path, since it would do nothing to improve the situation. We have chosen to stay engaged and attempt to drive changes on the ground".

Williams told employees that both he and CEO Tim Cook were "deeply offended" by the BBC's programme.

While Apple may well be right in the claim that "we know of no other company doing as much as Apple does to ensure fair and safe working conditions, to discover and investigate problems, to fix and follow through when issues arise, and to provide transparency into the operations of our suppliers", the difference lies in the gap between what the richest company in the world has said it would do, and what it has achieved in reaching the standards it set for itself. ®