At last! Something else for smartwatches to do as BMW promises park-by-wristjob demo

GPS-free parking proposed thanks to carpark plans baked into beemers 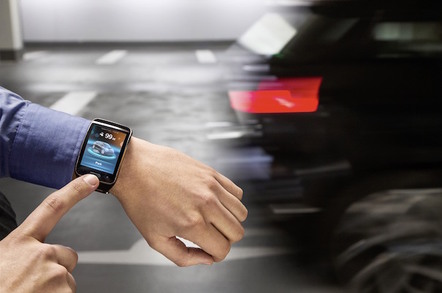 The company's been footling about with sensor-laden vehicles for some time and says it now has a research model i3 packing four “advanced laser scanners” that can “reliably identify impediments such as columns, for example in a multi-storey car park.”

BMW's CES demo will show off that technology, which it thinks can make a car able to avoid collisions and potentially lead to autonomous driving.

Another scenario the company's cooked up is a “Remote Valet Parking Assistant” that would see a command issued from a smartwatch to steer the vehicle independently through the levels, while the driver has already got out of the car and is on his way to a business appointment.”

After your appointment has concluded and you've signed that billion-dollar deal, BMW imagines another utterance to your watch will see your car figure out when to leave its parking bay so it arrives just as you do.

To pull off this trick, BMW will need to upload a plan of a cark park into your vehicle. That's a bit of work, but less work than is required to install new hardware in a car park.

BMW is not explaining just why a watch would be a better way to despatch or summon a car than a smartphone. Bluetooth's range is long enough to command a car to seek out a parking space. Longer-range connectivity would surely be needed to retrieve a car, making that a task perhaps more elegantly accomplished using a smartphone.

Let's not that analysis get in the way of the fact that BMW has done something smartwatch-makers are, as yet, unable to accomplish: finding a credible use for the devices other than as fitness monitors. ®

Fitbit picks up Pebble, throws Pebble as far as it can into the sea

Smartwatch market down by one