NASA asks world+dog to name Mercury's craters (back off, 4chan)

Can't wait for Messenger probe to crash into Crater Moot 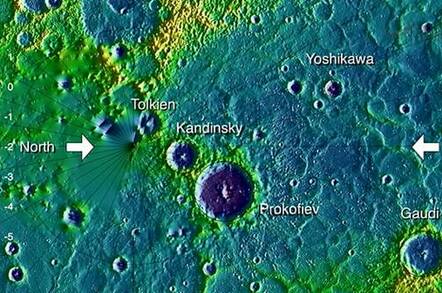 There's a chance to enter the history books (or at least a planetary geography atlas) as NASA is asking the public to help name five prominent features on Mercury, the tiny planet closest to the Sun.

In 2004 NASA launched Messenger – its MErcury Surface, Space ENvironment, GEochemistry, and Ranging probe – the first craft designed to orbit Mercury. Eight billion miles, three years of orbiting, and 250,000 images later, the probe is running out of fuel. Sometime next year Mercury's gravity will draw Messenger to its bosom and the spacecraft will become our first relic on the planet.

To mark the event, the International Astronomical Union (IAU) is asking members of the public to submit their suggestions to name five craters on the surface before January 15. The top 15 choices will be submitted to the IAU, which will make the final decision – just in case there's any 4chan-esque trolling.

The rules state the names must refer to individuals who have made "outstanding or fundamental contributions to the arts and humanities" and be "an art-historically significant figure for more than 50 years and must have been dead for at least three years." So Tolkien is in, Grumpy Cat is out (although you never know these days.)

The competition may sound like a publicity stunt, but there is a serious purpose to this. Until Messenger came long, the only pictures we had of the tiny planet came from the Mariner 10 probe in 1974, which made three flybys and photographed about 45 per cent of the surface with its very low-resolution (by today's standards) twin cameras.

Messenger was designed to take about 2,500 images of Mercury's surface, using four cameras capable of 250 metres/pixel resolution for most features and 20–50 metres/pixel when used in combination on interesting stuff. In fact, Messenger managed to send back more than 250,000 snaps, and it's five of the most interesting geographical features that NASA now wants named for practical reasons.

"As scientists study the incredible data returned by MESSENGER, it becomes important to give names to surface features that are of special scientific interest. Having names for landforms like mountains, craters, and cliffs makes it easier for scientists and others to communicate. For example, it is easier to say 'Mt. Everest' rather than the 8,484-metre peak located at 27°59′17″ N, 86°55′31″ E," the competition organizers explained.

The five craters have been deemed worthy of a name either because they show interesting features of Mercury's unusual geology, deep enough to show some of the innards of the planet, or because it's around clusters of interesting stuff – such as the ice Messenger found at Mercury's pole.

After the competition deadline the results will be checked against the database of already-named Mercury features and other named object in the Solar System, and then submitted to the IAU for deliberations.

The winners of the crater naming contest will be announced when Messenger takes its final plunge and slams into the surface of the alien world. The probe is expected to make its last orbit next year between March and April. ®