Dark matter probing scientists fire up system by cooling it down 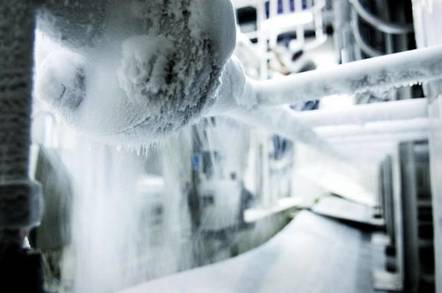 CERN boffins have started powering up their improved Large Hadron Collider – and say the particle accelerator will fire with twice the energy of its previous run by March.

"With this new energy level, the LHC will open new horizons for physics and for future discoveries," said CERN Director-General Rolf Heuer. "I'm looking forward to seeing what nature has in store for us."

After months of work, the magnets lining the LHC's 17-mile (27km) tunnel have been cooled to 1.9 Kelvin above absolute zero (-271.25 degrees Celsius or -456.25 degrees Fahrenheit) so as to achieve peak performance.

For the past two years, the world's largest science experiece has been shut down for upgrades, which included replacing some of the supercooled magnets that guide the particle beams around the collider's loop. Every single one of the 1,232 connections between them has also been upgraded.

As a result, CERN predicts it will be able to double the amount of energy in the beams from 6.5 teraelectronvolts (TeV) to 13 TeV when it makes the first test shots in March. If that proves successful, the science can begin a few months later. CERN hasn't ruled out pushing the machinery further over the three yeas the ring will be powered up.

"There's been a huge amount of work done on the LHC over the past two years," said Professor John Womersley, particle physicist and chief executive of the Science and Technology Facilities Council.

"This means that it will be able to operate at almost double the previous beam energy, bringing huge potential for major new discoveries beyond the Higgs Boson that was found in 2012. But it also means that the machine that's now being started up is almost a new LHC, and it's not a trivial challenge. Nonetheless, everything is on track for the LHC experiments to start collecting data in this new era by May 2015."

Assuming all goes well, four science experiments (ALICE, ATLAS, CMS and LHCb) will start revealing new clues to the foundation of the universe, including the balance between matter and antimatter that led to universal expansion and the type of particles needed to create dark matter.

"We want to see what the new data shows us about antimatter, and why there's so little in the universe. We want to chase the hints we've seen in previous measurements, whose behavior didn't quite match our expectations, in case these hints turn into discoveries." ®