Claim sweep that sunk site is just 'part of this game' – but will the Bay be back? 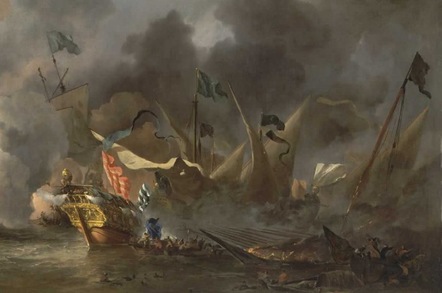 Copyright infringement clearinghouse site The Pirate Bay may or may not return, but its admins aren't the slightest bit concerned about the police raid that downed it or the ensuing extended hiatus, according to one anonymous spokesperson.

According to Mr 10100100000, police actions like the one that confiscated Pirate Bay servers in a Stockholm data center last week are "something that is part of this game," but the site's admins are using this development as an opportunity to take a much-needed rest.

One reaction has been to start up independent mirrors of The Pirate Bay site. It was only a few hours after the original site went down that a mirror of it popped up on a domain hosted in Costa Rica. Then on Monday, rival BitTorrent tracker IsoHunt put up its own site using what it claimed was a copy of The Pirate Bay's database, saying, "Nothing will be forgotten. Keep on believing, keep on sharing!"

Such whack-a-mole shenanigans aren't unusual for torrent sites, either. The popular torrent tracker Demonoid has similarly been knocked down many times, occasionally being replaced by new sites based on backups of its database.

Mr 10100100000 said he and others in The Pirate Bay crew approve of the clone sites, saying, "If [Pirate Bay's] code wouldn't be so shitty we would make it public for everyone to use, so that everyone could start their own bay."

As for when the original, authentic site will return, however, Mr 10100100000 seemed to think that restoring it might not be as much of a foregone conclusion as some have assumed.