Is there ANOTHER UNIVERSE headed BACKWARDS IN TIME? 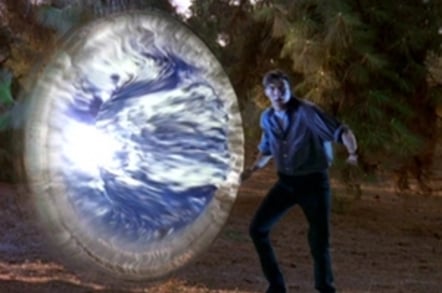 Cosmologists reckon we could be sitting opposite an alternative universe where time is moving backwards, thanks to the Big Bang.

Dr Julian Barbour of College Farm, Dr Tim Koslowski of the University of New Brunswick and Dr Flavio Mercati of the Perimeter Institute for Theoretical Physics have tried to figure out the age-long puzzle of how and why time moves forwards. This new theory could give them an opportunity for an answer. Possibly.

The "arrow of time" theory was developed by Arthur Eddington in 1927. It described the formation of time that moves in a single direction as an emergent property of entropy, which is a measure of how disordered a thermodynamic system can be.

To cut a long story short, entropy increases with time. For an arrow of time to form, the universe would have to be uncharacteristically ordered and the entropy very low. Astroboffins like Barbour, Koslowsky and Brunswick find this unsatisfying.

Instead, they explore the idea that gravity has a reverse effect on entropy and form a more orderly pattern. They describe the possibility of two arrows rather than one, where a pair of universes are present and moving at an equal pace, just in opposite directions.

The boffins' paper says: "Each solution can be viewed as having a single past and two distinct futures emerging from it." The shared past is the Big Bang and our universe belongs in one of the futures. The location for the other one, however, is up for debate.

The full paper was published in Physical Review Letters here. ®