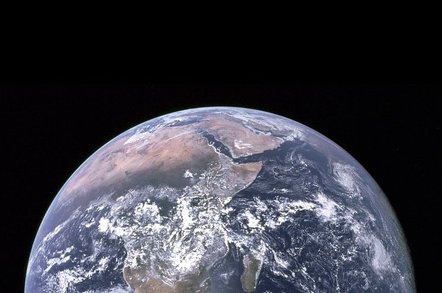 Developers who have built web apps that take advantage of the Google Earth geospatial imaging service have just 12 more months to make the most of them, because the online ad-slinger plans to shut down the Google Earth API next year.

According to a Friday blog post, Google will continue to fully support the Google Earth API through the coming year, but it will go dark on December 12, 2015, taking any and all Google Earth web apps with it.

The web isn't really the primary means of accessing Google Earth. The Chocolate Factory provides downloadable client software for PCs and mobile devices, including an enterprise edition for organizations that want to meld their own mapping data with Google's. But some web devs have used the Google Earth API to embed the service's data into their own sites in clever ways.

The problem is that rendering Google Earth mapping data in 3D in a browser window requires a plugin – and that plugin is rapidly becoming obsolete.

Specifically, the Google Earth plugin was created for the ancient and insecure browser plug-in architecture called NPAPI, which was first created by Netscape to extend its browser in the 1990s.

Both Google and Mozilla are working on phasing out support for these archaic plugins in their respective browsers, with support already removed from the 64-bit builds of Chrome for OS X and Windows.

The web standards community, meanwhile, has been working to add support for hardware accelerated 3D graphics to browsers via the WebGL standard. But if Google is planning to release a WebGL-based client for Google Earth, it's keeping mum for now.

"3D is in our blood, and while we can’t announce anything just now, we look forward to sharing more exciting product news in the future," Google Maps API product manager Ken Hoetmer said. ®