Boxed in fandroids get fresh round of updates 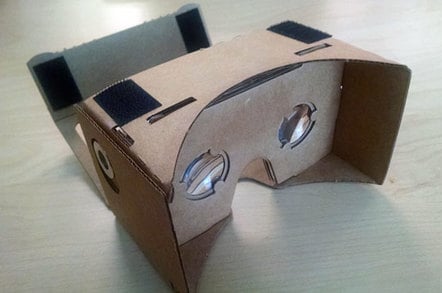 Google's virtual reality headset Cardboard has now been shipped to 500,000 customers, after the ad giant unveiled the gadget earlier this year.

Mountain View's VR gear landed at its I/O event in San Francisco in June, when some wondered if Google was taking a playful dig at Facebook's hefty $2bn buyout of Oculus Rift by unveiling such a lo-fi gadget.

But six months on, Google has claimed that half a million fandroids have strapped on one of their VR headsets.

Google said it had released a bunch of updates for its customers, coders and makers of Cardboard. It added in a blog post:

There are now dozens of Cardboard-compatible apps on Google Play, and starting today we’re dedicating a new collection page to some of our favorites. These VR experiences range from test drives to live concerts to fully-immersive games, and they all have something amazing to offer.

Google told developers that it had created Cardboard SDKs for Android and Unity to help them spend less time "wrestling" with puke-inducing glitches such as lens distortion correction and side-by-side rendering. ®