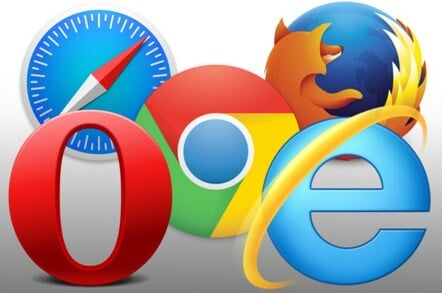 Yahoo! has started urging visitors to its homepage to "upgrade to the new Firefox" – even when they aren't using the Mozilla browser in the first place.

The message, along with a Firefox logo, has begun appearing for some users in the purple band along the top of Yahoo!'s portal pages.

It's displayed when the visitor is using an outdated version of Firefox, but it also shows up for any versions of rival browsers, such as Chrome or Internet Explorer. Users of the most recent version of Firefox don't see it.

Whether Firefox should be considered an "upgrade" for users of other browsers, however, is debatable.

The change comes not long after Yahoo! inked a deal with Mozilla to become the default search provider for Firefox users in the US – meaning US users who do take the Purple Palace's advice and download Firefox will see Yahoo! results when they type queries into the browser's built-in search box.

That honor used to go to Google, which for ten years had an exclusive arrangement with Mozilla to provide default search results for Firefox worldwide. Moz opted not to renew that contract in November, however, saying it preferred to offer Firefox users a variety of search options, depending on where they are located around the world.

At the time, Mozilla said it planned to "focus on expanding our work with motivated partners to explore innovative new search interfaces, content experiences, and privacy enhancements."

Whether Yahoo! gently nudging users of Google's browser to switch to Firefox counts as one of those "innovative" ideas is not immediately clear.

Besides steering visitors away from Chrome, however, Yahoo!'s move is a knock on Google in another sense: Although Firefox users will see their search results dressed up in Yahoo!'s trademark purple, the actual results themselves are provided by Google's hated rival, Microsoft Bing. ®