This week it rained in San Francisco and the power immediately blew out. Your tech utopia

Water falling from the sky disrupts the disruptors 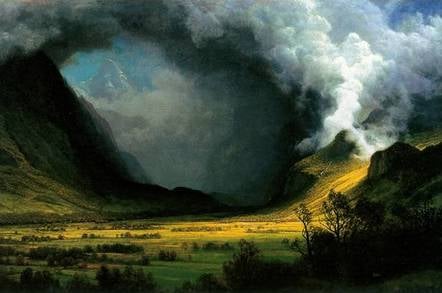 Opinion It's amazing what 12 hours of something can do. For Silicon Valley, and particularly San Francisco, half a day of heavyish rain that would be described "April, maybe early May," by many Scots Highlanders, has caused massive problems and highlighted again why the area is losing its edge.

At about 0730 PT on Thursday, a blown transformer knocked out power to the northern half of the city and wide swathes of the Financial District and the tech startup center around SOMA. The city's busiest underground train station was caught in the outage, and other stations, freeways, and part of the airport flooded out. More than 200 flights were canceled.

Red, orange and yellow marks the outage ... Half the city's power supply was deader than sequined bell-bottoms (Source: Pacific Gas and Electric Company)

As many as 100,000 people in SF, a city of 900,000, were without power after four to six inches of rain hit the metropolis. Even the Internet Archive was washed offline.

The big storm in SF has knocked out power to our main data center, so the site will be down for a while. We'll keep you posted here!

Programmers in the drought-hit city had to use flashlights to see each other in meetings after being plunged into darkness. Others queued for the office ping-pong tables when their Wi-Fi gave out. Schools and businesses closed for the day.

"The minute the power went out and people realized their internet connection was down, the descent into aimless madness was rapid,” Erin Nelson, of startup Location Labs, told Bloomberg.

If it was just the flooding, you could forgive the place for falling apart, but it isn't. San Francisco, and increasingly the rest of Silicon Valley, is fast losing the things that make it such a hive of technological innovation and profit. Not only is the infrastructure crumbling, the famously creative energy of the city is being dulled by ghettoization and uniformity.

Be sure to wear some diodes in your hair

San Francisco likes to style itself as the spiritual home of Silicon Valley, a magical techy nirvana where, with the right app, anything is possible. Today's storm damage has highlighted how nonsensical this head-in-the-clouds approach is, and why the focus of the technical world is shifting to other states and countries slowly but surely.

SF isn’t really the city at the center of Silicon Valley, anyway. That honor falls to San Jose, around which the first semiconductor firms clustered in the 1950s and 1960s. Stanford University's laser-like focus on high tech produced the skilled workers needed to drive the industry forward – and the free, or nearly free, facilities of higher education kept the supply going.

But, quite frankly, San Jose's a city no one lives in unless they have to – think England's Slough with sunshine. Instead it has been San Francisco, fifty miles up the coast, that grabbed the glory, and now it's where most internet and social media firms choose to set up, until recently.

Part of that is down to infrastructure. Despite today's outages, power is usually reliable although its internet connections aren't. A lack of competition and chronic underinvestment means San Francisco – and most of the Valley – is trundling along with bandwidth that would shock a South Korean, Scandinavian, or Swiss citizen, and we get charged through the nose for it.

The transport system is a mess. The seven-by-seven miles of SF have passable public transit, especially by the standards of the rest of the US, but the freeways are a nightmare in the mornings and evenings; a two-hour drive home at the end of the day is common for many people.

Within the city there are signs of decay everywhere. Go five blocks from City Hall into the Tenderloin and you'll see people smoking crack or defecating on the streets. Meanwhile, Twitter employees walk past these folks every day as they head into the offices the city gave the social media firm such a sweet tax holiday for buying.

The technology industry also depends on having enough smart people to come up with good ideas about how to use hardware and software, and here too California is failing badly.

Back in Steve Jobs' day, the costs of going to college could be paid for with a summer job or two, and the Apple cofounder regularly signed up for classes for a while before drifting off again to put ideas into practice.

He wasn't the first. Hewlett and Packard were the same, Xerox PARC was made from overeducated youngsters who wanted to try stuff out, and Intel traditionally liked to hire home-grown youngsters who had benefited from low-cost education.

Nowadays an education at one of the good universities will set you back tens, even hundreds of thousands of dollars. People still do it, if they are smart enough or rich enough to do so, but for an increasing number of people it's out of the question. Public schools too have been starved of cash and almost any San Francisco resident will have to pay to get a good education for their kids.

In the short term that doesn't matter so much now that travel is so cheap and accessible. Those that want to work in the field will still flock here, from within the US or from overseas. But increasingly we're seeing they will also fly out again once they've got their groundwork done and open their startup firms elsewhere.

Just recently a friend who's a lecturer at University of California Berkeley said that there has been a big spike in students leaving, or talking about leaving, and heading to Germany. That Eurozone nation is now offering tuition-free university places to all-comers. American students, who can choose between staying at home with crippling debt or moving overseas and putting up with German food, are taking the obvious choice and shipping out.

Next page: The price of success
Page:
Tips and corrections
66 Comments