'I'm begging you to join' – ICANN's NetMundial Initiative gets desperate 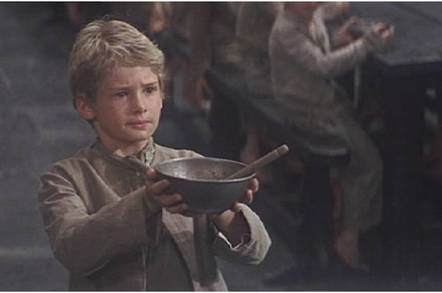 A conference call [MP3] between the organizers of the "NetMundial Initiative" and business organization the International Chamber of Commerce (ICC) earlier this week saw ICANN's CEO Fadi Chehade pleading with the group to withdraw their rejection of the program and join its "coordination council".

"I'm begging you to join the council," Chehade told attendees having spent 45 minutes trying to persuade them to overcome their objections.

Those objections [PDF] were many and varied: 15 of them, many with multiple sub-questions and contained in a five-page letter sent two weeks ago.

Chair of the group, Joe Alhadeff, outlined the main ones at the start of the call before handing over to the organizers to provide clarifications. By the end of an hour, the business representatives seemed only marginally happier.

You're not the only one

ICC Basis is not the only group to be less than impressed with the initiative. Having rejected its approach and even declined a "permanent seat" on the council, the organizers sought to persuade the Internet Society why it should get involved. At the end of several days of discussions, its CEO posted a blog saying nothing had changed and ISoc was still out.

Likewise the key Internet Architecture Board (IAB) which has rejected the current initiative, and the Internet Governance Forum (IGF), which has declined to accept its permanent seat.

Civil Society organization the Just Net Coalition published a statement saying that it "rejects firmly and forcefully the transfer of global governance prerogatives to corporate led initiatives" and another civil society group noted that it had "very significant misgivings".

Regardless, the three NetMundial Initiative (NMI) organizers continued to drive forward with their plans, rejecting again a request to delay creation of the council until people have had an opportunity to discuss their concerns.

Something useful did emerge from the conference call this week however: some details about why the initiative is being created at all started to emerge, as well as how much money is being put into the program - something that the organizers have previously refused to divulge.

ICANN CEO Chehade told the call that each of the three organizers was putting in US$200,000 each for the first year of the initiative - $600,000 in total. What remains unclear is where that money is going.

The organizers gave a series of confusing and conflicting answers to the questions put forward by ICC Basis.

One of the biggest concerns the group has is that the NetMundial Initiative will be used to replace parts of the Internet Governance Forum (IGF) - which internet and business groups have been investing time and money in for nearly a decade.

One of the organizers, CGI.br, was behind the NetMundial conference earlier this year in Sao Paulo from which the initiative name has been taken. It will also run this year's IGF in Brazil. At the launch event for NMI last month, CGI.br representative Virgilio Almeida drew a direct line between the three things - the NetMundial conference, the new initiative, and the IGF in November.

"NetMundial and the IGF are two separate processes, two difference things" Alhadeff told the meeting. "The concern is that the NetMundial Initiative may create confluence."

In response, the organizers have repeatedly denied they intend to replace or encroach on the IGF's territory but when quizzed about what they do intend to do, ICC BASIS members repeatedly pointed out that it appeared to do exactly that.

The NMI sole aim is to create an information-sharing platform for people, the organizers said, it is not a discussion space (like the IGF). "The NetMundial Initiative is not a place for discussion. It will be where people share experiences and initiatives."

But that still sounds a lot like the IGF to listeners. "There is an IGF portal and best practice forums and proposals for creating policies out of sessions," said one member. "It seems straightforward to me that you could simply empower the IGF portal and have discussion through an existing venue instead of create a second venue."

The response, from Chehade again, was that "if the IGF moves in this direction then these ideas would come much close together". Asked why the money put into the initiative could not be provided directly to the IGF instead, Chehade gave an answer that highlighted an apparent dislike of the annual forum.

"In the past six weeks, many people have approached us saying we have been trying to build this solution but we have run out of money. Have you tried to pass money onto the secretariat of IGF to fund a solution - do you know how complicated that is?"

"But that is why we have the new IGF funding body," came the response, referring to the Internet Governance Forum Support Association (IGFSA) that ISoc mentioned it was providing $100,000 in funding to in the same blog post as it rejected the NMI.

Chehade suggested in response that the reason for the recent IGF improvements was the NetMundial conference in April. "A representative at UNDESA told me that one of things making the IGF more progressive is what happened in NetMundial. It has an energizing effect on the IGF." He then suggested that the NMI's funding could help the IGFSA: "When it becomes a reality, perhaps we can come closer to each over and fund each other."

This double-talk over the IGF also spilled into what the NMI would actually be doing and the need for a coordination council.

The organizers repeatedly claimed that the NMI would only create a platform that would be bring people together, nothing more, nothing less. What's more the council would have only the very lightest impact on it.

"The council will not be deciding what is on the platform, or where it goes. The most it would do is enable a working space for people concerned about a topic to come together and bring tools for recommend solutions," said Chehade. Moreover, "nothing we do should be binding or pushing for implementation. It is simply a map."

But that begs the question why the NMI would need a 25-member council, which is likely to include United States' Commerce Secretary Penny Pritzker, to design a piece of software. Is that not somewhat below her pay grade?

And do the organizers intend to spend their $600,000 flying 25 VIPs around the world to meetings rather on creating the actual platform they claim the entire program is built around?

Despite the talk of funding projects, the organizers made it clear that the $600,000 was entirely separate to any funding plans and would be spent only on the program's "secretariat" which comprises three existing staff members from the three organizers.

Next page: And finally - what's really going on
Page:
Tips and corrections
6 Comments

Surprise decision will likely see him leave before critical transition