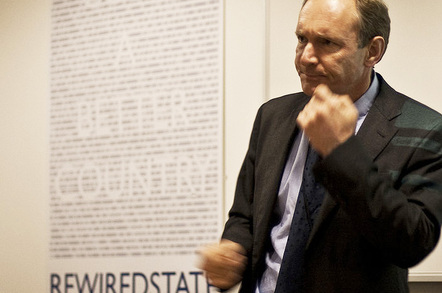 The internet is a basic human right – and most certainly not the work of CIA agents – says the man who brought about the World Wide Web.

Sir Tim Berners-Lee has called out Russian President Vladimir Putin over his claims the internet is run by the CIA as a US intelligence operation.

"It was the academic community who wired up their universities so it was put together by smart, well-meaning people who thought it was a good idea," Sir Tim was quoted as saying by Reuters.

Putin served the collective online community with a nice show of trolling in April when he declared the internet was being run by Uncle Sam as a "CIA project."

How Sir Tim came to invent the World Wide Web 25 years ago is documented here; his breakthrough came some decades after the internet as we know it was born from ARPANET, a program funded by the US Department of Defense – not quite a "CIA project," Vlad.

Fortunately for Sir Tim, there are other things to discuss than the delusions of Russia's semi-elected leader. The Brit's World Wide Web Foundation has published a report [PDF] detailing the state of web access and government censorship.

The report notes that government interference with web traffic is on the rise as 38 per cent of the countries studied were subject to some form of government censorship. In general, roughly half of the population online is subject to censorship. Although the CIA isn't running the internet, government organizations certainly do have a hand in what people see online.

Researchers with the foundation noted that just 40 per cent of the global population has internet access, something Sir Tim would very much like to change.

"It's time to recognize the internet as a basic human right," he said.

"That means guaranteeing affordable access for all, ensuring internet packets are delivered without commercial or political discrimination, and protecting the privacy and freedom of Web users regardless of where they live." ®