Apple lawyers fight to silence dead Steve Jobs: 'No right' to hear him from beyond the grave

Assuming someone alive can be found to sue 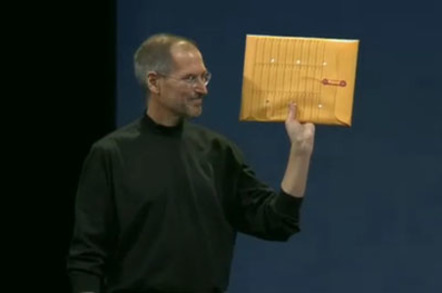 Bloomberg, CNN and the Associated Press have asked a court in Oakland, California, to publicly release the deposition, which was recorded six months before the iThing supremo lost his fight against pancreatic cancer in 2011.

Apple is fending off a lawsuit that claims the Cupertino giant deliberately removed from iPods music files that were downloaded from the iTunes Store's rival. The case has been rumbling on for the best part of a decade.

At the start of this month, the court was shown a 27-minute excerpt of Jobs' video as evidence in the case, and a full transcript was made available to the public. Lawyers for the media, however, pushed for the release of the tape on First Amendment grounds.

That claim is being opposed by Apple, which argued in a proposed order [PDF] that a written transcript was sufficient for the public record.

"There is no First Amendment right for any member of the press or the public to obtain a recording of live witness testimony," Apple's lawyers claimed.

"The Supreme Court has held so on two occasions and said so in dicta on others."

The case, which accuses Apple of breaking antitrust laws, hit something of a speed bump this month when the Cupertino giant argued there were no actual plaintiffs eligible to claim damages for the time period specified in the case – 2006 to 2009. Simply put, the people suing Apple didn't own an iPod during the years they claim the music players were screwing over iTunes rivals.

According to a report from the Associated Press, however, a new plaintiff may have been found. The news agency says a woman from Massachusetts could be allowed to serve as a representative for the plaintiffs in the class-action case. Should the plaintiffs prevail, all customers who purchased an iPod between September 2006 and March 2009 will be eligible to collect a share of a class-action damages payout. ®