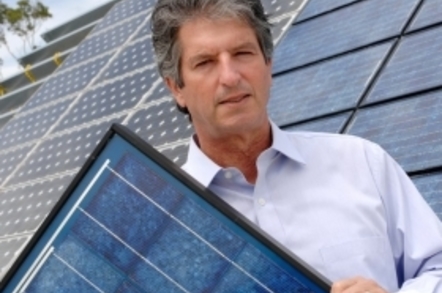 Australian solar trailblazer Professor Martin Green's group at the University of New South Wales is claiming a world record in solar efficiency, and this time it's not the usual half-per cent incremental improvement.

The Australia-US Institute for Advanced Photovoltaics that Green directs says its combination of off-the-shelf solar cells and optical bandpass filters has achieved a conversion efficiency of over 40 per cent.

Key to the system performance is the use of optical bandpass filters to improve capture and conversion efficiency, along with mirrors to focus the sunlight.

While lab researchers have delivered silicon that has a higher conversion efficiency, the AUSIAPV result is claiming a record for a whole-of-system output.

Commercial partner in the project, RayGen Resources, specialises in “solar tower” projects and is planning to use the technology in utility-scale projects in China. With advances in the efficiency of the underlying silicon, the company's CTO John Lasich reckons system conversion efficiency will soon pass 45 per cent.

As described in the Sydney Morning Herald, the record-setting design stacked three panels designed to capture different wavelengths, with excess light from the stacked panels directed to a fourth panel.

UNSW's Dr Mark Keevers, who managed the project, says that since the record was set using commercial cells, “these efficiency improvements are readily accessible to the solar industry”. ®

Lasers are too pricy, so we're using BLINKENLIGHTS instead

Solar power can head out of the clouds says CSIRO