NORKS: We didn't hack Sony. Whoever did was RIGHTEOUS, though 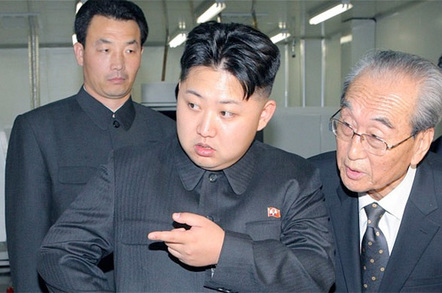 North Korea has dismissed claims it was behind the crippling hack suffered by struggling film studio Sony Pictures.

But a spokesman at the country's National Defence Commission said today that the attack on the company's computer system "might be a righteous deed of the supporters and sympathisers" with Norkers as they attempt to "put an end to US imperialism."

We do not know where in America the Sony Pictures is situated and for what wrongdoings it became the target of the attack, nor [do] we feel the need to know about it.

But what we clearly know is that the Sony Pictures is the very one which was going to produce a film abetting a terrorist act while hurting the dignity of the supreme leadership [of North Korea].

The comedy movie in question is The Interview, starring Seth Rogen and James Franco, who play two bumbling journalists hired by the CIA to assassinate Kim Jong-un.

Solid evidence that shows North Korea was behind the security breach of Sony Pictures' network – which included personal information of 47,000 people such as staff security numbers, home addresses, salary details and emails being leaked as well as unreleased movies and scripts – is yet to emerge, however.

As The Register reported yesterday, sources at the Hollywood film studio told us that staff had received bizarre emails on Friday threatening them and their families if they refused to take the side of hackers, working under the moniker Guardians of Peace or GOP, who raided the firm's corporate servers.

In the past week, the malefactors have dumped their stash of information onto file-sharing networks, having pinched the data from Sony's servers. ®

Massive attack stung film studio ahead of The Interview release

WannaCrypt 'may be the work of North Korea' theory floated

Lazarus rising again... or not